Fifty years ago a new order was established in a land of chaos. The Blood Brothers, once nothing more than a band of mercenaries, now watch over the land and guard the rulers of the Citadel. Through them peace was kept, until a new foe appeared. Things were in disarray once again. Former allies turned traitorous, new foes rising out of long forgotten pasts, but new friends are ready to help bring order back to the land of Arnashia. Blood Brothers 2, by DeNA, is a new free-to-play strategy roleplaying game for iOS and Android devices where you are a commander in the Blood Brother army. Organize your troops (you can have three squads with five troops each) and lead them to victory on the battle field in this harrowing tale of betrayal arising from an new evil. Winning over more heroes to gain them all, unlocking souls to use as power-ups, and fighting in the arena against other players, is just the start of all this game has to offer. 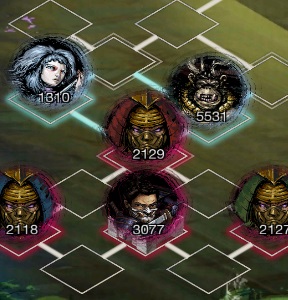 Gameplay is easy as battle systems have rock-paper-scissors-style strengths and weaknesses set up. Swords are weak against Arrows, but do more damage to Riders. Riders do more damage to Arrows, but weak against Swords, and of course Arrows are strong against Swords and weak against Riders. Though you have five troops when you battle, you can only select three per round to attack the enemies. Every hero falls in one of the previously mentioned categories, so you're going to want to pair them up with their counterpart as they attack those right in front of them. They will do more damage and take less damage from them if the strength and weakness are paired up right. Even though you have to spend energy points (which regenerate over time) to play a chapter, you don't just unlock one battle described above. Instead you unlock a map, with at least three enemy battles, one boss, and usually a miniboss. You chose your pathways to go, dodging enemies or trying to land on them first to get first strike in the battle that ensues, but they move around as well and can easily gang up on you or take over your fort, an instant game over. To win, you must land on their fort and fight off anyone still there, but bypassing battles means you lose experience points for all your heroes and gold coins. The coins are used to buy levels for one hero, so when you gain a new one at level one, you don't have to grind old levels to get them up to where everyone else is. But even if you need to grind, the game gives you options of how to do so, as well as rewards along the way. There are special event chapters nearly twice a month with rewards you gain by playing through, arena player-versus-player battles in real time that will reward you for ranking-up, and going back to play old levels lets you recapture previous heroes which will let you level them up further. When they are completely maxed out, you can evolve them into a new hero.

While you can buy coins and blood sigils with real money, it's not something I ever felt compelled to do. Blood sigils let you retry rounds if you lose, but they also buy the special packs that contain higher level heroes. You only gain one at the end of a chapter, but the daily rewards give you a sigil almost every day. So if you're patient, you can soon have enough to buy a big pack. The arena is a good mix of players who haven't paid for anything, and those you have a bit more strength because of their loose pocket change, but I found that it does pretty well matching you up with someone similar to your strengths. The storyline gets a bit bogged down as every part of the story has to have someone fighting you. It can feel like you're playing through filler episodes in a series. "What's that? You need to get some information from me? FIRST WE BATTLE!... oh you won? Okay, cool. I'll help you, but NOT UNTIL YOU DEFEAT MY FOES!" Take that and stick it in between the actual interesting story bits. and you've got the gist of it. But hey, we all want the battles anyway right? That and to collect all the heroes. There are a great many of them and though there are three times a day you can gain another, usually much weaker, there are still many you have yet to see. While there are a few things you may wish they would change, like making it much easier to swap out squads, Blood Brothers 2 offers a lot, with great variety of heroes, items, and storylines without pressuring you to buy things with real money.