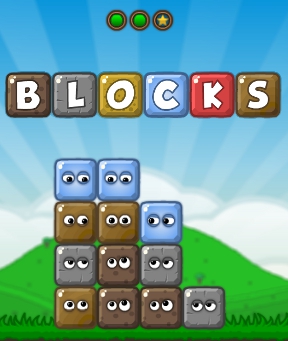 Do you like match-3 puzzles? Like... a lot? Enough to play one hundred levels of them while your every move is scrutinized by tiny judgemental eyes? Well good news, everyone! Edvent and Gibton's Blocks will scratch that particular itch and then some. Click and drag to swap blocks onscreen into rows of three of a kind so they vanish, or fall into place to allow for matching. Once all the blocks have been cleared, you'll pass to the next level, but you'll only earn a star if you win within a certain number of moves, as represented by the little green dots at the top of the screen. Why would you want stars? Well, because they're used to unlock more levels. Why stars? Well, because, as a wise man once said... it is always stars.

Blocks is, to put it bluntly, simple. Cleanly designed and implemented, but simple nonetheless, and potentially fairly familiar for those of you who used to play games on graphing calculators too. If you don't mind a game that treats your success with childish exuberance and doesn't provide a whole lot of variety, however, Blocks delivers the sort of slow, thoughtful puzzling that looks great and will quietly fill up any time you give it. It's the sort of solid, dependable little game you can take home to mother... provided your mother always wanted you to settle down with a bunch of mute, immobile pixels. Which I guess, for some people, is probably a step up.

Is that a Professor Farnsworth reference and a Ben 'Yahtzee' Croshaw quote all wrapped up in a delicious review??? THIS is why I love JIG. I come for the reviews, I stay for the leg room.

If you happen to have a gay identical twin brother, I would appreciate it if you flew him to Australia ASAP. He would definitely be a step up from the pixelly 'boyfriends' I keep presenting to my mother. Almost as bad as the time I tried dragging three similar looking guys together and got angry when they didn't vanish. That was awkward.

Possibly the sweetest thing anyone's said to me all day, Dandy! <3 Thank you. Bro-hoof!

Can anyone get this game to play? I can't. I'm on a Win XP machine, won't work in FF or IE, and I've tried updating Flash. It just hangs after the ad screen with no option to "Play" it.

[The game is loading and playing fine on Mac, Windows XP, and Windows 7, tested in a variety of browsers, including Chrome and Firefox. -Jay]

Reminds me of a game I used to play on my calculator...

This Game IS Tetris Attack, not just the concept, the levels are exactly the same too. I must have played this game a million times on my TI-83+ graphing calculator back in High School. The publisher has a lot of balls releasing this as their own creation. It's easy to have 100 levels when your just coping them from a Game Boy Game!