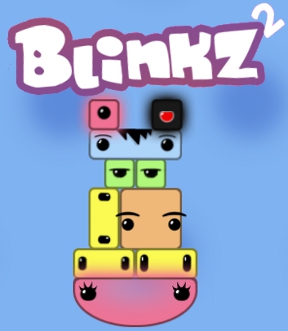 Blinkz 2 by Aimar and Alexander Ahura is one of those games you should be immediately suspicious of, because it seems to me anything this adorable and filled with soothing sounds and colours is either trying to brainwash you or implant subliminal suggestions. ("Drink more Ovaltine!" "Gary Busey is your master now!") The aim in this physics puzzle is the same as in the first Blinkz game: to unite the pink blocks on each stage by clicking other shapes to remove them (mousing over the stars they drop for bonus points), or in some cases make them explode, making sure you get rid of any sullen "evil blocks" in the process. If your little pink Casanova falls off the screen, the game will sadly inform you that you're unlucky, and you'll have to try again. Most of the time, success is less about carefully dropping him from top to bottom and more about figuring just the right blocks in the stack to remove to send him sliding or flying to his destiny.

Chances are if you've been on the internet long enough to learn how to correctly pronounce "meme", then you've seen a game like Blinkz 2 before. The concept is a very simple and familiar one, and yet there's something so smooth and charming about it that it feels like the perfect choice for break-sized gaming. The different blocks add a bit of interest to the established formula, while the puzzle-like construction of some stages means that solving them usually comes down to more brainpower and less trying frantically to click on everything within a milisecond. Blinkz 2 doesn't break any molds or deliver a whole lot of innovation, but it's a cute and cuddly and cleanly handled little physics puzzler that makes for easy-breezy casual gaming anytime.

Game loads up for me, try updating your flash, clean cache and cookies, this might do the trick.
Either than that it's a great little puzzler. If you love this genre, this one is perfect for you.

Can someone smarter than I am explain to me what the criteria are for getting three stars in each level?

Is there a way of solving level 9 that doesn't require being inhumanly fast?

@Maude Buttons- Quite simple, just collect all the little colorful stars that burst when you click the objects.
More stars=More stars :)