Boarding Party's chaotic action/defense game Bit Battles is probably a fairly accurate representation of what me actually directing a real war would be like. You guys! Go there! More guys now! Stab them! Blast them! NO, MORE GUYS! WE NEED MORE GUYS! YAAAAAARGH! In your defense of a floating sky castle that suddenly finds itself opposite three death pits constantly spawning enemies, your job is to drag and drop one of your three hero classes to each pathway to fend them off. On the battle screen, you click inside the spawn area to summon heroes with mana, and click on heroes outside the spawn area to activate their special ability, also with mana, which regenerates over time. Have your heroes reach the enemy's side of the screen to win, and you'll be granted cash to spend on upgrades, and also level-up that particular hero type. 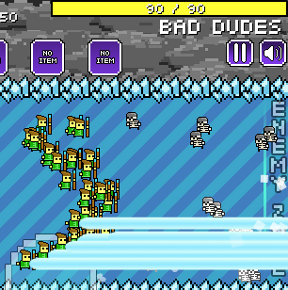 It's a simple concept, and yet Bit Battles makes it addictive and fun. The different hero classes add a satisfying bit of strategy to things, though being unable to see the enemy's stats makes it difficult to figure out what class is best suited where. As a result, the game winds up feeling more like overwhelming numbers is the key than anything else, even though the way different classes have different strengths and abilities does mean you have to adjust the way you play a bit for each one. The frustrating thing is that you can only activate hero powers by clicking when they're outside the spawn zone... and that does you no good at all when all your available heroes have been pushed back into that spawn zone by the enemy forces. Ultimately, it's a fun, frenetic game for a while, though it may lack some of the depth and/or bells and whistles to really make it stick for long. It's basically the catchy, digital equivalent of bashing together fistfuls of action figures and making "BOOSH BOOSH BOOSH" fight noises when you were a kid... and sometimes, that's exactly what you want.

It keeps crashing for me after a certain point :(

It's a really nice concept, but this game needs a hell of a lot of fleshing out. For one thing, the balance is way off. The wizards are basically insta-win even on the final boss, whereas the gun dudes are a hell of a challenge to win anything with even right at the beginning. Also, more, shorter levels would be way fun.

Why am I dragging in a clicking game? It's so frustrating to choose a bomb and then have it not appear at the exact right time! In a game of half-seconds, the delay needed for dragging is unacceptable.

you have to drop it where you want the bomb. It would either be 2 clicks or a drag, and I think dragging works better in that case

Wtf this game, can't win at all using the knights or whatever they are.

The quick win with the gunmen or knights:

All you need to do is drop the gunmen or knights in one spot and rush to the line for the quick win every time. Crushed the boss battle in 6 seconds.

The one thing that really stinks is that if one of your characters doesn't finish the battle and level up they really become handicap later on.

Also it really would have been nice for the number keys to be used for the bombs/items.

Nice game, it was sort of balanced at the start, even took a few more tries to get through some waves, but after a certain stage all character types are so strong they will crush every wave.

Don't know how to formulate this, but the build-up could've been more gradual indeed.

But, all in all, a nice little diversion with sort of a new concept :-)