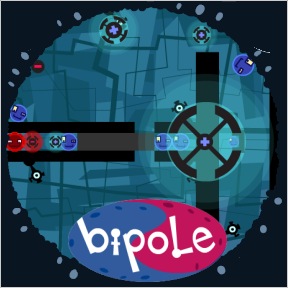 What's that you say? You've got the making oppositely charged balls annihilate each other in a physicsy sort of way fever? Yeah, that bug has been making the rounds ever since we reviewed Collider last week. Don't worry, although it's very contagious, our doctor tells us that the only adverse effects are deep cravings for hot cross buns and a new-found appreciation for Paula Abdul.

Luckily, there is a new, cutting-edge treatment that is gaining popularity among sufferers. From the labs of Spil Games comes Bipole, a physics-heavy spin-cycle of a puzzler, conceived as part of the recent Global Game Jam. The goal is simple: annihilate all particles by colliding them with particles of the opposite charge — denoted here by color. Use the [left] and [right] arrow keys to rotate the level, taking advantage of gravity and electrostatic attraction/repulsion to gain momentum and drive particles towards annihilation. As with real-life charged particles, like colors repel while opposites attract. 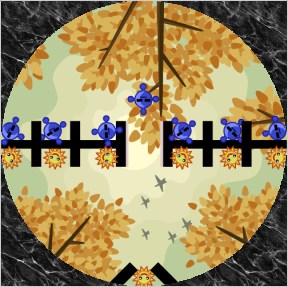 An additional feature that will surely drive physics purists absolutely bonkers: pressing [space] locks the particles in position, completely erasing any momentum they had built up. During this time, other movable objects in the game will continue their motion, and you may still rotate the level. Pressing [space] again unfreezes the particles.

The Spil team also seems to have discovered the secret behind magnetic monopoles, for sprinkled throughout the 35 levels are dots of magnetic charge, which attract and repel according to the same rules as the particles. However, if a particle gets too close to one of these monopoles, its charge is reversed! The ability to switch particle polarity is a double-edged sword, hindering as often as helping, so be very careful how you use it. The monopoles can sometimes be toggled on and off by hitting a switch with a particle, which again can be both helpful and harmful. Finally, I probably don't need to even say this, but don't let the particles touch the evil-looking flashing material marked with a skull!

Analysis: Bipole plays like a bizarre hybrid between Sola Rola and Magnetism, capturing the addiction and frustration factors of both. Although there are certainly puzzle-solving elements to the game, success depends more on execution than planning, and that [r]estart button will come in quite handy after many a mistimed maneuver. The learning curve is perfectly executed through the first ten or so levels, after which the difficulty fluctuates like a slinky trying to yo-yo on a trampoline. Some levels are pretty straightforward and some are quite involved. There are two or three that rely heavily on luck (with the low point being the level that requires you to be holding down the arrow key from the very beginning), but for the most part the level design is solid.

With its chill soundtrack and sleek graphics, Bipole is almost as much fun to see and hear as it is to play. In fact, the authors have released not one, but two versions of the game, which I will call Noir and Cute. It appears to make absolutely no difference which you play, and you can even switch halfway through and your times will be loaded automatically.

So fear not, feverish fans of physics fun, for a prescription of particle projectiles will cure what ails ya.*

Thanks for the suggestion, Bryan!

*Side effects may include dizziness, visions of anteaters, and a startling wonderment at just where all that time got off to.

Pretty nice game so far.. but at the moment I'm foolishly stuck on level eight.

I'm stuck on level 20.... help meeee.. there are 8 couple balls stuck adjacentaly.. and one blue ball blocked in middle.. and only 1 red balls moving . and in the center 2 poles of flowing currents.....

I'm stuck on #8 too, but note that you can skip levels and come back to them later by clicking the button in the top-right-hand corner (the one that looks like a hand pointing to some nodes).

For level 8, they can touch each other without red leaving its area. It took a few tries slamming the blue against the little gap.

level 26 is totally crazy skill based, stuck on this... I was doing idiocrancy on level 20... it was pretty easy...help me on level 26

for level 8 press the space bar and stick the blue ball at the corner of blue powersource. now slowly move the iron piece and force onto blue ball but quickly release the blue ball so that it can push on otherside.. now rest is easy.... hehehe

The last one to get is the trapped blue

Use the loose red to free each next red in turn

I want to tell this thing to developer. I don't know it's a gameplay part or not. But if you hold the space bar then the ball is fridge but slowly (slightly shaking) move to gravity directions while holding the space bar. This thing help me to complete on many levels. :P

I suggest if he could change this and revisit the code.

I'm now only stuck on level 26

bit of a cheat though as I haven't done levels 30-34, it takes your time when you complete level 35.

And finished with the 2nd fastest time ever (29 minutes) :) Quite a surprise really...

Good game but I agree it sometimes feels a bit like luck. I found that each level did have a "correct" solution though...

I know how to do it. Executing it is a hassle.

Yeah you definitely need to take your time on each red. Remember to freeze as often as possible so you can control the fall.

Anyone else stuck on level 14?
All i can think of is:

hit the balls with the hexagon

but i can't seem to make it work.

Sometimes it was difficult to understand what was going on. Several times I beat a level with random movements. But still a good game! :)

Btw, is those highscores for the day or the last hour or something? Because I'm in second place! This is so odd.. o_O

you got the right idea... accelerate the rock, then change direction and make sure the rock clips one of the atoms pretty much vertically to the the tube

Sorry about the double-post, but it reckon everyone has their own "highscore" with preset scores - not a global player list. I appear a few times on my list and no extra highscores have been added since I first played.

You're probably right, Syntax. It's not an online highscores and those are dummy names :)

.. this makes much more sense than I getting second place on a first attempt. lol

Can anyone give me some tips for level 21?

I can't seem to get the lil' latch holding the blue to open...

...After two days of trying, my conclusion is that L29 is engineered for failure. The margins on that level are insane.

I pretty much gave up when I finally got the blue particle free...and then watched the red particle go *pop*. :(

Up to that level, I'd been having a blast. How did you guys do it?

Drop the red guy into the cog wheel by using space and turning the screen so you can time him in so he avoids the poisonous (orange) spikes on the wheel. Tilt the whole screen so that the red guy falls into the shute. Press space to leave him hanging in mid-air above the switch then wobble the screen to move the skulls out of the way of the blue guy. Then press space to let them both fall - once the blue guy is past the skulls you might need to freeze them again so you can time the cog wheel and avoid the spikes. The rest is easy ;)

Simply hold down left or right, for me it's right, and eventually they will go together.

There you go. This method got me