What happens when the team behind Abobo's Big Adventure makes a new game? An old school action arcade game built around mad scientistry, gorillas, pogo sticks, and chainsaws is born! Bionic Chainsaw Pogo Gorilla stars a once-happy gorilla who is kidnapped by an evil corporation and subjected to harsh experiments. Naturally, that involves hacking off his limbs, replacing his legs with a pogo stick and his arms with chainsaws. Now that the gorilla has escaped, you get to guide him to freedom! 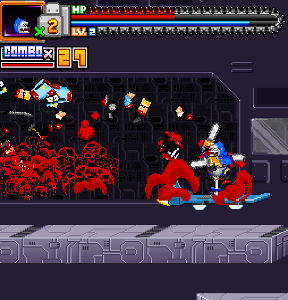 You have a couple of attacks at your disposal in Bionic Chainsaw Pogo Gorilla: a short-range melee flail, a longer range chainsaw swing, and your pogo jump, which can be used to stomp foes Mario-style. You're turned loose in a series of medium-sized levels where you'll battle all kinds of wandering laboratory personnel and hybrid animal things, each one ready to end your little escape plan. As long as you can land the game's tricky jumps and avoid taking too much damage, you'll make it to the next stage intact, probably sporting a few new costume pieces as well!

As you might as expect from a game with a title like this, it's filled with fast action and bloody chainsawing deaths. Not for the faint of heart. It's a relatively simple but wholly enjoyable platformer, though, providing a stiff adrenaline shot that can easily take the place of your morning cup of coffee.

@Ewan, since many people use Adblock + the site has to find more and more new ways to earn money, to run.

The game is amazing :D So mnay bodies, and so much fun, and amazing bosses, love it. If it was for money, i would have bought it.