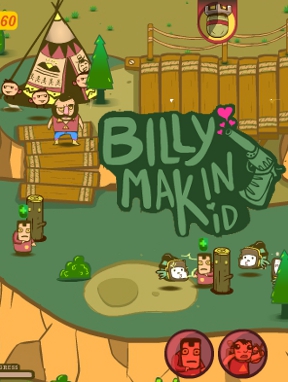 Sometimes a good story isn't necessary to make a good game. Case in point: Slab Games' new tower defense offering, Billy Makin Kid. Why Makin Kid, you ask? Because Billy is the last man left on the earth after super-evolved apes have taken over, and to defend himself against the hordes of flying monkeys and angry gorillas, he has to spawn children and turn them into defense units, apparently without the aid of a single female. Makes no sense? It doesn't matter, because the game features some great twists on the tower defense genre, from the way you create units to the types of towers themselves, which aren't towers at all, but Native American totems.

While the game lacks a coherent story, it has a clear objective. As Billy spawns new children inside his teepee, you're expected to defend Billy's spawning ground against a boss who is kept locked up in a cage. summon soldiers by clicking on their icon and then on a wooden totem to plop them into the game. You need a certain amount of kids as they spawn periodically to summon defenders, not to mention some gold, so keep an eye on your resources and mouse over any dropped gold to pick it up. Hit enough times by ape enemies and the cage will break and the boss will be unleashed. If you can't recapture the boss before it reaches the end of the map, you've lost. Fortunately, you can craft new kinds of units from raw materials dropped by enemies. Click on a dropped treasure chest to open it, and then on your inventory in the bottom right to open it up and drag items together to combine them. This allows for plenty of surprises along the way and describing them would only ruin the fun. Perform well on a level to get gems you can spend on upgrades between stages.

Like another game it most closely resembles, Kingdom Rush, you will have a wide variety of ways to upgrade units, abilities, and totems, all of which are well balanced. But, unlike Kingdom Rush, BIlly Makin Kid doesn't give you a choice of difficulty and there aren't any special modes to unlock. Still, the game's ability to craft bigger and better units as a group (freeing the player from the tedious work of upgrading individual units), plus its unique map settings and setups, will be enough to satisfy even the most jaded of tower defense strategists.

Here's a list of all the items in case anyone gets stuck on finding that last item....

This looks like fun, but the cursor is really laggy. Anyone else having trouble with that?

the cursor is really laggy, I tried changing the quality but nope

Developers should always provide an option to turn off custom cursors in Flash, they always result in a laggy experience. I just made a slight modification to the embed settings for this game that I hope will make it a little less laggy.

What about combos? I have:

An egg and a green egg and an explosion. The egg made the green egg, but now it just sits there.

Combinations are one of my favorite parts of this game! Much like the Doodle God series, you find the best stuff by mashing things together with the help of a little obscure logic.

Here are a few combinations you can make with your new items:

I like the artwork, the theme, the different units and their abilities. And the combo possibilities make this game quite special!

But! The lagging cursor is bad. The whole onscreen activity seems hyperactive -- towards the end of levels my units appeared to be in some sort of manic frenzy -- and that's without an enemy in sight. It's downright impossible to keep an overview of what's going on and having to move the screen around makes things even worse. I hated the coin collecting -- so much it made me almost stop playing.

All in all, this is no match for Kingdom Rush, which was so impressively well-crafted -- but potentially it could be, with a few tweaks to make it more playable.

@ Trinn, how did you make frankenstein? im having trouble making the combos, and what is the yolk for?

You can make the Frankenstein by combining the Skull with the Thunderstorm.

According to its in-game description, the Yolk "helps to strengthen Billy" which I imagine would mean either passively raising his attack power or his health.

Some combinations are easy to guess and fairly logical, but there were others I found simply by trying to use any new item on all of my old items. Just keep experimenting :)

Just a quick thing for anyone who hadn't noticed.. Near the bottom right of the creation screen there is a little a <—> b = X, with X being the number of possible creations left. (Sorry if this has already been mentioned in the description, I very rarely read them all the way through.)

Here's a list of all the items in case anyone gets stuck on finding that last item....

how do you get the last 2 items