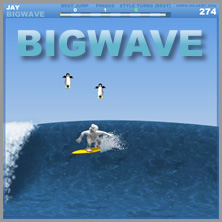 Also known as Yeti Sports Part 6, Chris Hilgert has come out with yet another game in his series of brilliant and famously addictive Flash games featuring penguins and, of course, a yeti. Big Wave is about surfing to gain speed, then rack up the points by doing aerial jumps and stunts, and score bonus points by kicking penguins. Unlike his previous games in the series which were all very accessible to pick up and play easily, this game is a bit more difficult to control. However, patience and persistence pays off and you'll be surfing with the big dude with a little practice. Click.

Update (9/02): There are a lot of people playing this game since it was just released, so expect delays when loading the game in the window.