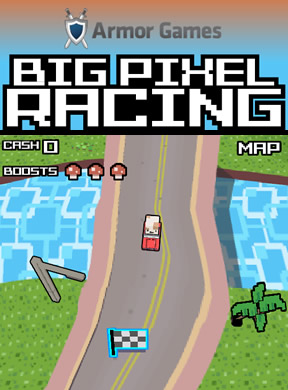 Ever wished that someone would combine the free-roaming, street-racing style of Grand Theft Auto with the vehicular sabotage of Mario Kart? And then throw in a little bit of Nintendogs just for good measure? Of course you have, who hasn't?! Fortunately, the good people at Big Pixel Studios have stepped up and made our dreams into reality with Big Pixel Racing.

Upon starting the game, you'll be informed that you need to save your brother from crime boss Big Dog, who is an actual dog in this case. You can drive around town with the [arrow] keys, looking for available races to win cash. Each race has 3 difficulty levels, followed by a duel with Big Dog himself. Your opponents will get harder to beat with each level of difficulty, but of course, nobody said you have to fight fair. Scattered around the race tracks are yellow and red boxes that will contain either weapons that can be deployed with [X] or additional speed boosts for your car that can be activated with the [Z] button.. Use these strategically to come in 1st, 2nd, or 3rd, and you'll unlock the next difficulty level, where you'll have to complete more laps and deal with smarter and faster opponents. The game also auto-saves after each race, so you can come back and pick up where you left off at any time.

In between the races, you can drive around town freely, although there is little to do aside from visiting upgrade shops. The shops can be used to change your car's color or purchase some bizarre items that will improve your performance. And I mean seriously bizarre. Sushi increases your boost time? Fuzzy dice improves your speed? Sure they do, in Dog City! It may not make a lot of sense, but if you were expecting realism in a game about street-racing dogs, then you were just asking to have your heart broken. 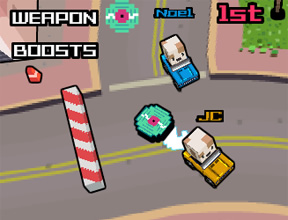 Analysis: The graphics are the first thing you notice about this game, and they're what really make it great. I'm a sucker for retro-styled pixel art, especially when they manage to make it look like a lot of puppies are driving around in Micro Machines. It would have been nice to see the upgrades as they were added onto the vehicle, but I can understand how that would have been difficult, given the blocky nature of the game. The soundtrack is especially notable and well-done; this is one of the few games where I wasn't tempted to hit the mute button and enjoy the sounds of my inner thoughts instead.

Unfortunately, there are some flaws that keep this game from being perfect. Controls are a little loose at the beginning, and although this is part of the upgrade system, it can be frustrating when you're just starting the game. The real problem with gameplay, though, is when your opponents use their weapons to cause you to spin out uncontrollably. Getting turned completely around and having to straighten yourself would be bad enough on its own, but it's made worse by the fact that this NEVER happens to your opponents. And if you manage to get thrown out of the boundaries of the tracks, it will take so long to get back that you can forget about winning that race. And although I didn't experience it, some people have complained of the game freezing and not letting them continue. But the game is so charming and has so much potential to be great, that it would be a shame to not at least give it a chance.

Glitches aside, Big Pixel Racing is an excellent attempt at a fun, quirky, browser-based racing game. Now get out there and save your brother!

The link at the end that says "Play Big Pixel Racing" starts with "httphttp://" just so you know.

The game is basically perfect, but with some little bumps that needs to be smoothed out. The slippery controls may be upgraded, but before that happens I find myself rammed in the backside by a massive mob of NPC's that boosts all at the same time, causing me to spin out. The upgrades are funny, etc. The cow prints give 16 grip, zebra 32 and tiger 38, but if you buy all three, the grip stacks, so... you end up with cowzebratiger print seats... lol.

Invest in boost duration. This and speed are the main points of this method. As soon as the race starts, mash the z button for the boost. Powerups in this method are for when there isn't a boost available. If there are more than one boosts, take the seconds to pick them both up, especially if you have more of the boost duration upgrades. As long as you manage to get ahead of the pack in the beginning, you should have no problem getting first.

Also, you can mess up the other races by pressing against the back half of their cars, like they mess you up.

I look forward to the inevitable Disney movie adaptation of this movie, starring adorable Labrador puppies and voiced by Ray Liotta and Cheech Marin. I will give it all my monies.

Not perfect, but an absolutely wonderful way to spend a while at the ol' keyboard. I'm sure I could drive straighter if I could stop giggling.

My favorite part was the intro screen. Actually, that, and the intro thingy are the only parts I've gotten to! When I click the button to play, it freezes and closes my windows! This is certainly connected to my horrible graphics card.

Bleh. The AI can shove you around like you're made out of feathers, but when you try to nudge them it's like pushing a granite block. This is even worse at the very beginning, because all of the AI drivers invariably use their boosts as soon as the race starts - which means that even if you were in front of one of them, he just moves you off to the side.

I really enjoyed this game, but I felt that there should have been some reward for getting first in all the Truck races. Other than that I had a good hour playing it.

Love the graphics, and the game is pretty fun, but man you can get every single upgrade before finishing 2/3s of all the races. Later in the game, I discovered an entire course I'd missed, and ended up lapping the poor saps in the beginner race.

I think this game is broken for the Mac.

Anytime I try to "Duel" Big Brother, I just get taken to the normal 3-lap race against 5 other cars, and if I win that, I get 20 points added to my status and $1000. No matter how many times I win that race, it doesn't help advance the game.

Just a bit too easy - I had very little difficulty getting all the upgrades. Also a couple of the tracks are too long, especially when doing three laps.

Overall a very fun game though, with surprisingly good controls. I didn't mind being pushed around by the other cars as it evened things out slightly.

nvm, I figured out the problem.

if you click on "DUEL" with your mouse, it will ausomatically load the PRO race. But if you instead hit spacebar, you'll be taken into the race with Big Dog

the only think i dont like, apart from its eventual limited-ness, (which you would expect from a flash game anyway), yer the only problem is that i wish the camera would rotate as you turn, because i find it hard to know whether to press left or right

if you get gold on every race, there`s a reward, but not really aanything special

I agree with jason, I think that this game can be expanded much more and I look forward to it if they plan on it. Personally, once I got the hang of things, I found that Big Dog was way easier than the other levels. At least that should be tweaked.

@JIGuest: What reward? >_> I got gold on everything, including truck races, and get nothing.

@Bundt, perhaps you also need to be number 1 in the rankings to get the reward.

Just take a look at your car.

Cute, but I really dislike racing games that have weapons that make you spin out. It's more based on luck rather than skill, which is even more apparent in the early parts of the game. I'm doing well and them BOOM, someone makes me spin out with a weapon and I try desperately to catch up which isn't easy when most of them are faster than you.

Graphics are lovely, very fun start, but controls, ai are really terrible. I beat the boss on every race, but it was more chance than any actual skill! Seriously, the other cars have more control over where you go than YOU do, and those crappy bombs that turn you 180 degrees just make give up right from the beginning!

That was alright. Never completely impossible, sometimes annoying... It seems to be mostly a game of chance and luck.

I liked the game.
Bit annoying when you blow up.
I especially liked the truck races and the final big dog paint job.