In Bevel's Painting, a free indie horror adventure by Maninu and translated by vgperson, you play an artistic young girl who winds up inside one of her own paintings one day when she discovers the canvas aglow. You know. As you do. Inside, things look magical, with fairy servants and teddy bear chefs, but there's something strange going on. ... well, stranger than getting sucked into a painting where everyone speaks gibberish. There's danger hidden around every corner, and this world doesn't exactly seem to follow logic our heroine would understand, though making the wrong choice could have... unfortunate consequences. Use the [arrow] keys to move and the [spacebar] to interact, while [ESC] opens the menu. You can only save at the little paint boxes you find, and most items will need to be used manually, so open the main menu and select an object from your inventory when you want to try to use it. Additionally, as you explore you'll find paint colours that can be used to change the world around you, though using a brush makes it dirty, and you'll need to find clean water to wash it before you can use it again. There are nine different endings to find, and the way to unlock all of them isn't necessarily obvious. Save frequently, and in different slots. Though on the short side compared to some freeware horror adventures and possessed of some chase sequences that may annoy more than anything else, Bevel's Painting crafts an unsettling and intriguing atmosphere with a story more implied than implicitly told. Note that while most of the text is in "Bevelese", it can be translated manually once you've worked out the alphabet... there's a clue as to how to do so in one of the "worlds". 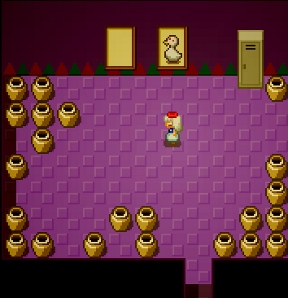 Initially almost entirely devoid of dialogue or readable text, Bevel's Painting is a seriously weird and disorienting game, and largely that works in its favour. So much of its storytelling is done organically, through implication and the things you see happening even if you don't understand them, which gives the game a great sense of mystery and unease. Most of your time is spent exploring each new environment and having to figure out on your own how to proceed, and the game is strongest when its focusing on that rather than the frankly annoying "action" sequences where it's possible to die. It's not the death that's frustrating, it's the fact that these sequences, like having to time your runs across a floor filled with spikes, just don't feel like they fit alongside the purposeful imagery that makes up the rest of the game. Figuring out what to read into the sudden change in a room you just passed through, or what a character might represent... that's intriguing and rewarding. Having to reload a save because you accidentally zigged when you should have zagged? Eh. The latter half of the game incorporates being chased and hiding very heavily into the gameplay... on the one hand, this ups the tension considerably, and gives everything an air of malice that constantly keeps you on edge. On the other, well, they're just sort of clunky, and they're jarring against the rest of the gameplay in a way that more puzzles wouldn't be. 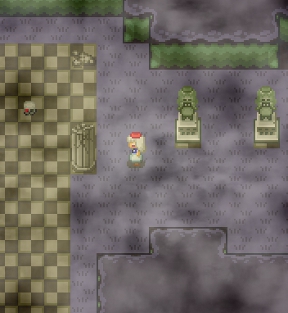 While Bevel's Painting does have jumpscares, some of them more effective than others, most of its horror comes not from its gorier aspects, but the sense of wrongness that pervades nearly every single scene. Sound is used sparingly, so when one area's "soundtrack" consists of low, even breathing, it raises the hairs on the back of your neck the entire time. It's not a particularly difficult game, with most of your time is spent trying to find Paint to proceed to the next area, and using items to overcome obstacles like crossing gaps or unlocking doors. The hardest part about Bevel's Painting is largely going to be unlocking anything other than the most unsatisfying ending, which leaves you with no answers at all. It's short enough that if you know what you're doing a playthrough will likely last less than half an hour, but all the hoops you need to jump through in order to get the conditions right for achieving some of the endings means a lot of replaying and experimentation unless you're following a walkthrough. The end result is a game that might wear out its welcome with players who don't have the patience for the trial-and-error. Which is a shame, because Bevel's Painting is compelling and creative, and knows how to be creepy rather than relying purely on gross-out horror. If you don't mind a lot of planning, there's even a special, extra difficult stage with its own unique ending as well. It's weird, to be sure, but despite its flaws, Bevel's Painting is definitely worth at least a try by any horror fan looking for something different.

Alternate Ending #8 - The Real Me

Alternate Ending #8 - The Real Me

Please tag as free. I almost missed a great opportunity because I thought I had to pay for it. I'm sure there are others that feel the same.

4,506 Views
1 Comment
chrpa— Jayisgames needs your help to continue providing quality content. Click for details Welcome to the Roundup 37 with three games! As mentioned in the previous roundups, only odd-numbered episodes are featured since even-numbered are for Robin Vencel's patrons. More...  ...

2,309 Views
0 Comments
chrpa— Jayisgames needs your help to continue providing quality content. Click for details Welcome to Weekday Puzzle! Jani Nykänen's pixel puzzler is fun - it's Pacman-like game with blobs. In pancelor's puzzlescript puzzler you need to get boxes on their...  ...

4,041 Views
17 Comments
chrpa— Jayisgames needs your help to continue providing quality content. Click for details Hi, the newest Weekday Escape is here! At the beginning you are supposed to escape from two U.S. states with Selfdefiant, and then you find yourself in...  ...

2,093 Views
2 Comments
jayisgames.com— Jigsaw puzzles have been around for centuries, and they haven't changed much in that time. They don't need to. Nothing beats a jigsaw when it comes to quiet, focused, meditative gameplay. I'm A Puzzle, the online jigsaw compendium from...  ...