Being One:
Episode 5 - Infection 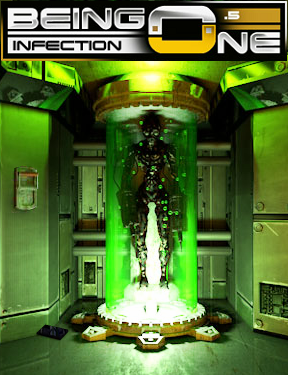 We thought we had seen the last of Being One. But here he is again puzzling his was through another mysterious space station. Here though, the stakes are higher: It's a race against time to cure himself of the disease he's been infected with, battle the station's other inhabitants, and move one step closer to his revenge. But nothing is as it seems in Being One: Episode 5 - Infection, the newest in Psionic's series of horror adventure games.

As in previous installments, Being One: Episode Five is very much a cross genre work. The framework is point and click adventure, where you use the mouse to examine and pick up items from around the station. Your inventory, accessible in the upper-right corner of the screen, has a number of tools you'll use in your investigation: a microscope for examining biological samples, an autohacker used to access terminals around the station, a multi-tool for disassembling mechanical devices, and, of course, a gun for use on any hostile creatures. These tools will often prompt minigames of all different kinds: shooter, arcade, puzzle, and so forth, all controlled with the mouse. The story is told through datapads and evidence collected hidden-object style around the station, and the plot is sure to leave you twisted.

Play the entire Being One series:

Franchises that release new installments several years after a supposed finale are usually met with skepticism. We're looking at you, Indiana Jones. Fortunately, Being One had enough dangling plot lines and questions that the transition to a new episodic is relatively seamless. It may be a little convenient that the first place Being One goes to after his escape is another atmospheric space station, but let's face it, it's good atmosphere, and it'd be weird if this game took place on a farm or something. The graphics are as gorily beautiful as ever, with some CGI bits that are almost aggressive in their "check out what our animators can do!" awesomeness. The game could have used a little more hand-holding, especially in the use of your new inventory devices. There is a logic behind all of them that is satisfying to discover for yourself, but it's hard to do that when bullets start flying. Also, the game ends rather suddenly, which is good in the sense that an Episode 6 must certainly be in development, but man, let's hope we don't have to wait another three years. All in all, though, fans of the series and of scifi horror in general will be happy to spend a little more time in the skin of Being One, and will definitely be eager for more.

Play Being One: Chapter Five - Infection

Being One: Episode 5 - Infection Walkthrough

Being One: Episode 5 - Infection Walkthrough

Hooray! I love this series!

This may be the best one of the series. Varied, looks great, and just fun.

I can't believe it's been three years, though. I feel...old.

Just the other day I was thinking of how the endings to ongoing mystery/sci-fi series tend to be disappointing, and Episode 4 of Being One stuck out in my mind as one of the worst ever.

Now, three full years after a series that normally only had a couple months apart, they announce that they aren't, in fact, done? Wow. Just... wow. I am thrilled.

I had to use the walk through on the "difference game". Unfortunately, the four digit number for the lift does not work.

Nice game even though I can't finish it.

Sorry about that 4red3s. Going back to the game, it looks like the code for each Difference Engine is randomized, so I'll edit my walkthrough. Thanks for bringing it to my attention!

I've played all the Being One games up through #4, and the first one is still my favorite. Mainly this is because it's not so shootery and reflex-oriented :). I'm not sure if I want to play this since I tend to get frustrated with games I'm terrible at, but idk. I'd like to know the story, so maybe.

And a sequel, three years later... this gives me more hope for Ghostscape!

how do i kill the nano slave in the pod in lab five?

I wish there was a way to bypass the firewall minigame. The second round is impossible. It's getting to the point where I don't really care enough to keep trying. It's a terrible touch to an otherwise really good game.

I really love this series. It is "believable", if you will, and the graphics are very high quality. The plot grows deeper and deeper as you progress through all 5 in the series, and I like the occasional gun fights thrown yo keep you engaged. Props to the game makers. Being One 6 (and beyond) would be very well received indeed!

1,062 Views
0 Comments
jayisgames.com— Welcome to the Blackhaven walkthrough! In this game, you're playing Kendra Turner, a young college student interning at Blackhaven Hall. At first, you're just doing your job normally. But soon, you'll be caught in a spider of secrets and...  ...

Views
0 Comments
jayisgames.com— Modern racing games are becoming more and more advanced and complicated, maybe too much for their own good. Sometimes, those who grew up in an era where arcade games were dominating the market, and the term "internet" is still...  ...

Views
0 Comments
jayisgames.com— This short game (almost feels like a demo of an AAA game) has many similarities to the Souls series from FromSoftware. One major distinction is that, while you mostly use melee weapons in the Dark Souls series and its...  ...

Review of Nova Drift Game + a Q&A with the Developer!

845 Views
0 Comments
jayisgames.com— Check out our review of the new roguelike/shooter, Nova Drift + and exclusive Q+A with the developer!  ...