After years of peace, the evil Queen Amethyst has called her minions (everything from giant eyeballs and mushrooms, to your more typical zombies) out from under whichever rocks they were hiding under to try to take over the realm of FellCrest. Call the heroes out of retirement to fight with weapons and spells in BattleHand, a strategic card battle game by Another Place Productions. I hear out of work heroes like to hang out at taverns, so maybe you can recruit some there? 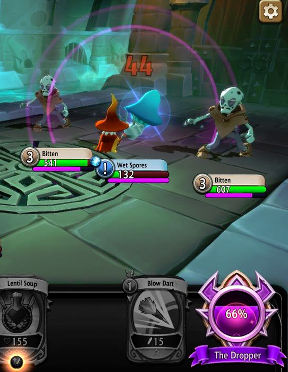 The game is simple to learn. Each hero holds a deck of just eight cards of several different types, and you can take two heroes into every fight. Pay attention to their elemental strength and weakness to pick the most effective team for the skirmish. During a battle you will have four cards displayed at the bottom of the screen. If it's an attack card, tap and drag it to the enemy you want to attack. If it's a defense or heal card, use it on yourself or your teammate. The number in the top corner indicate how many turns you have to wait until the card is activated. Cards also posses perks. Perks give each card a certain percentage chance to trigger an extra effect, such as poison or guaranteed crit. Tap on an enemy to get information on its next move, or tap on yourself to remember what you have queued up. Getting uncommon battle cards using in game currency is slow-going, unless you're willing to shell out some real life bucks for card packs. Good thing you can upgrade the cards you begin with. During your adventure you collect booster cards which can be used to increase the damage or healing stats of the cards in your hand. When they get maxed out, you can use yet other collected items to evolve the cards to become even more powerful. Cards are not the only things that gain levels as you go. Your heroes also level up, gaining more hit points and unlocking special abilities. Whenever you give or receive damage, your hero's trait meter starts to fill. Traits are powerful spells that can turn the tide of battle, often in the form of powerful multi-target attacks. But don't get too confident, your enemies also have special powers! It's using them intelligently that can give you the advantage.

Besides the campaign story line, there are other places to battle for cards, prestige, and more loot. There's the gauntlet, which features dungeons that get progressively harder. Will you stop after one and take the prize, or press on to try for a better bounty? You can also pit yourself against other players of the same level to compete for loot. The biggest weakness of the game is the free to play model, though this is done better than most. There are no intrusive ads, but there are dungeon keys needed to play each level that get used up then replenish slowly over time. The low card hand limit makes figuring out a strategy manageable, as opposed to the overwhelming number of choices in some similar games. This makes BattleHand a good choice for newbies to the genre, but that doesn't mean it's not good for veterans as well. There's plenty of subtlety involved in fine-tuning your gameplay and your deck. Throw in quests and achievements and you've got plenty to keep yourself entertained for quite awhile.