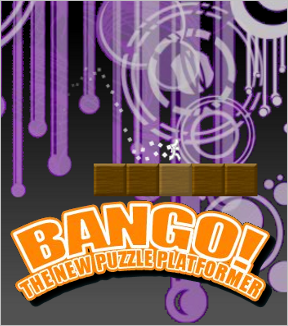 Look! Up in the sky! Is it a puzzle? Is it a platformer?... no! It's both! It's Bango! Isn't it majestic? Isn't it glorious? Just don't stare up at it too much. You might be smashed in the face by a falling block, and then boy will your face be... uh, well, not red so much as... broken.

Created by RJGames (Nitro Platform 2), Bango! is an exercise of not only skill but patience. Using the [arrow] keys to move left and right, and tapping the [space] bar to jump, you play a tiny little stick figure with admirably sparkly feet who dashes about the screen on top of brown blocks. Once you've touched a block, beware; as soon as you step or jump off one, it falls. The goal is to clear the screen of all of them, and some genuinely fiendish block placement in later levels makes that much harder than it sounds.

In fact, some levels are so hard we really felt for the nameless, faceless little protagonist. Who put him there? Do the blocks fall because of the curious sparkles that trail his every move, making it both blessing and curse? What is his motivation? Is there some sparkly little love interest waiting just off screen? Oh! That must be it. How romantic! Keep running, little hero! We believe in you!

While Bango! has been on the casual gameplay scene for a while now, we held off featuring it initially due to several bugs that made the game more frustrating than fun to play. Although most of these have been ironed out, one of the bigger ones persists. If you happen to brush against the side of a block while attempting to jump up onto it, the block will vanish as though you already stepped off of it. You'll wind up having to carefully judge even the smallest jumps, since a wrong foot in this game means having to restart the entire level. You could argue that this makes the game even more challenging, but having the careful planning you put into navigating later levels be undone by a collision detection issue is frustrating to say the least.

Still, there's a lot to like about Bango! The simple, bright graphics. The ultra peppy soundtrack. The ability to take your time and think your way through the levels. If puzzles are your thing, then Bango! is here to be your new best friend. Get ready to run and jump your way to victory and high scores! Just remember to always watch your step.

Anyone else have the problem where the character won't stop jumping? I don't think it's /supposed/ to be that way.

I really got frustrated this game even though I liked it a lot. I often felt that the controls didn't respond the way I wanted them to. Sometimes I would hit space to jump and find myself jumping again on landing, even though I wasn't holding space. The collision detection mentioned above was a huge issue and wanted to make me walk away. However, it became addicting and now I'm stuck in the challenge levels. I'd like to see more done with this idea.

"Just remember to always watch your step." Is there no end to the scourge of split infinitives?

Yes, well, they always said I was a rebel, pumpkin. No good can ever come of me.

Takes 100% of my cpu. Something went wrong when programming this game.

I didn't like how jumping near the top of the screen meant the character disappears and you have to move blind.

Found it pretty basic but played through the normal levels.

I think this is quite a refreshingly different twist on this type of puzzle. Ok it's a bit awkward sometimes but I'm having a lot of satisfaction going through the levels.

A bit of an annoying bug: if you click OPTIONS and go to the main menu between levels, it'll reset your progress and put you back at level 1. (This doesn't happen if you do it during a level.)

I have the same Photoshop brush set used to make the vector background. xD

Okay, now on to the game. I think it's a great concept, especially the fact that you can take your time (while on a regular block) and plan out your next move.It's not the most challenging of games, but it doesn't really have to be. Also, amazing cameo at the end.]

My only complaint is blocks that disappear when you try to jump up to them, and brush against the corner. I've lost way too many lives to situations like this...

I do hope to see more of these in the future, though.

A bit frustrating at times, but altogether no a really bad game. Finished the normal levels with 50,902

It's true, the collision detection issue is a little annoying (and I don't know how the thing was programmed, but hopefully it's easy to fix? The sides of the blocks really shouldn't count for collision detection anyway, at least not while jumping), but the game itself is pretty good. Enough, at least, that I can just fully ignore that little bug and keep playing.

Not bad, but certainly could be better. The "Platform" part of the game was pretty solid, except when you stepped on the edge of the block. But the "Puzzle" part felt a bit lacking. Five kinds of blocks were enough to develop some nice challenges, and yet the ones found in the main game were straightforward enough for me to finish all 30 levels in about 15 minutes. The Challenge packs were nothing too special, either: while the puzzles were more elaborated (thumbs up for that), they relied much more on infuriating, pixel-perfect jumps than on anything else.

Another thing worth mentioning is that there's something wrong with the achievements: when I finished the Challenge Pack #2, I got a Highscore award. Nothing out of the ordinary, as I did score over 95000 points. However, the award congratulated me for beating the creator's highscore in Normal Mode. Good to know that, if you can't get the score in the main game, there's a second chance for you in the Challenge Levels #2... Also, I never got the award for unlocking the second Challenge Levels, as those were open from the beginning. Go figure... =S

All in all, this is a fun but very short game. There's a lot of unexplored potential here, but this could be fixed in a sequel (level editor, maybe?). So... that's all!

I wanted to like this game, I really did, but the numerous and plentiful bugs got in the way. :-(