Now available on Good Old Games, Bioware's classic RPG Dungeons and Dragons adventure still holds up to scrutiny today, almost thirteen years after its release. Baldur's Gate: The Original Saga and Baldur's Gate 2 Complete may be old, but they still pack one of the most engrossing, challenging, and deep gaming experiences out there. Will you save the world and yourself in the process, or seize power and leave a trail of murder and pain in your wake? You choices determine the course of the story and the fate of your many companions as you travel across the Forgotten Realms... or even below or beyond them.

The story begins in isolated Candlekeep, a place more suited to dusty scribes, where you live with your mentor, the elderly mage Gorion, and your best friend since childhood, energetic Imoen. What starts off as any other day running errands and trying to keep from getting bored in the library quickly turns deadly when you discover someone is trying to kill you, and it soon becomes apparent that Gorion has been keeping more than a few things about yourself from you... things you'll discover could change the course of the world for better or worse. In Shadows of Amn, the adventure picks up shortly where the original game left off. You awaken to find yourself and your companions the prisoners of a powerful wizard named Irenicus, who has also been experimenting on all of you. Your escape is inevitable, but your victory is short lived, when a friend is abducted and you realise you're even farther from home than you've ever been... and it isn't as easy as you might think figuring out who to trust when everyone seems to want a piece of you for their own reasons. 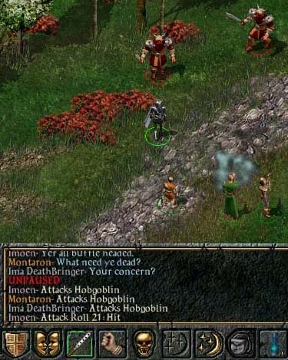 At the beginning, you'll be asked to create a character, which consists of choosing a gender, race, class (wizard, thief, melon baller, etc), and distributing your points into various attributes and weapon proficiencies... spend a bit of time on this since your character's makeup can greatly affect your experience. Gameplay is handled through a point-and-click style interface. Click on the ground to move, and on people or objects to interact. You can eventually have up to five additional party members with you, which is something you'll want to do since the various characters you'll meet are a wide variety that you can choose from to compliment your own skills. Don't want to worry about healing spells? Stuff a sock in Anomen's mouth and drag him along for his clerical abilities. Not so much in the muscle department? Join forces with well-meaning but addle-brained Minsc and unleash his butt-kicking for goodness (and his miniature giant space hamster) on your foes. Characters you can recruit can be found throughout the world, but many of them have their own agendas (and egos) so think carefully about who you take with you.

Combat is real-time, although you can pause and issue commands to party members whenever you like, and since you can move freely around the battlefield you'll probably want to take advantage of that a lot. Depending on the difficulty setting, friendly-fire from ally spells and attacks is possible, so think twice before you drop that fireball. Naturally, a big part of any RPG is gaining loot and levelling up, but since Baldur's Gate is based on the Dungeons and Dragons system, the process is a bit more complex. Beyond simply slapping a "better" sword on a character, you'll need to carefully consider how you allocate points in everything from attributes to weapon specialisations as it has influence beyond battle; a character with a high strength might be able to bend the bars of a cage, for example, while someone with a high charisma score could talk their way out of a fight... even if they walk right into a trap due to low intelligence. 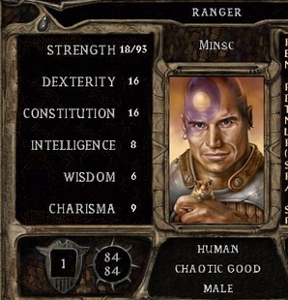 Analysis: Despite featuring a lot of combat, the series as a whole is extremely focused on the story and making you feel like your actions are changing the world and the people around you. The various NPCs you can recruit are all memorable and well-written, bickering amidst themselves, chatting, or even flirting with you. Both the original Baldur's Gate and the sequel, Shadows of Amn, are all about you and your sense of identity and rise to power, and as a result feel a bit more personal than your typical "Evil Empire X Wants To Rule The World" storylines. Throne of Bhaal, on the other hand, does feel like it eschews the deeper storytelling at work in Shadows of Amn for increasingly dramatic battles and ridiculous magic items. It's still enjoyable, it's just a bit less about complex character development and relations, and a bit more about stabbing multiple dragons in the face while your party members rain meteors down on an army of demons.

It is, of course, difficult. Not just in regards to combat, which can require a lot of strategy and will teach you the wisdom of frequent saves in different slots, but also in its story. Not only can party members clash violently between themselves (or against you) over alignment issues and plot choices, but the narrative isn't always black and white. Choices have consequences and impact, and the bad guys don't always wear top hats while the "good" option doesn't necessarily mean everyone gets a "happily ever after". This isn't a bad thing; there's a surprising amount of replay value to be found simply in exploring all your options in various plot points, and some can be very different from others. While challenging, the combat is also satisfying because it rarely feels unfair; even brutal battles can be turned through careful strategy and use of your surroundings... and of course the pause button. It makes emerging from those tooth-and-nail boss fights feel that much more epic. 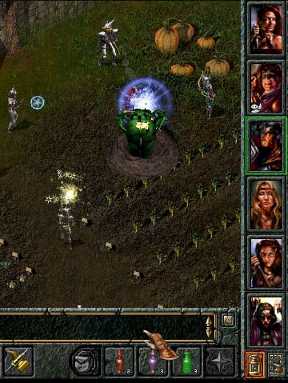 In fact, even if you have played Baldur's Gate before, you might want to pick it up again since the series has a remarkably talented and robust modding community that has for years now created everything from gameplay convenience tweaks, to aesthetic changes, to new party members with complex friendships or romantic paths. Check out Pocket Plane Group, Spellhold Studios, and The Gibberlings 3 for some of the creme de la creme to get you started. If you did own the original game, then you should also be able to appreciate the fact that buying it from GOG means you don't have to keep and juggle twelve discs whenever you want to play the whole series. Is there an award we can give them for that? It feels like there should be. I'm so disorganised.

We won't say Baldur's Gate as a series is the best RPG around, since that feels like throwing down a gauntlet and is entirely a matter of personal preference, but it is without question one of the finest RPG and story-telling experiences around. It may be a bit steep of an experience for players who like comparatively simpler RPGs based around Final Fantasy-ish mechanics, but if you don't mind diving in and getting knocked around by a few beholders from time to time, Baldur's Gate provides an incredibly deep game full of replayability that will wrap you up for days on end. Highly recommended, even if you've already taken a trip or three through the Realms before.

I love Baldur's Gate! It has such an involving story.. not since Chrono Trigger I had such experience with a game. And never again.

Ooh, that sounds like fun. A Chrono Trigger vs. Baldur's Gate flame war! *runs and hides*

pfft. Both were awesome and can't be compared because they were so different. That being said, BG wins.

I was merely stating both games have awesome story.

...but Chrono Trigger totally would win!! and you're all ugly for thinking otherwise! LOL

If you ever played this and enjoyed it, I also recommend Planescape: Torment. I'd say Baldur's Gate would make my top thirty video games list, but Torment is in my top five.

I can't comment on Chrono Trigger. Despite the seemingly millions of games I've played, very few have been JRPGs.

Oh, you'll see a review for Planescape: Torment eventually. It's on my list, but that game's deep... like I need scuba gear to get down to where it likes to swim. Baldur's Gate is one of my personal favourites. (When I was flirting with the guy who would become my husband, I actually picked this up as part of my effort to find out what Dungeons and Dragons was all about.)

Also, Chrono Trigger is pretty great, and it's near and dear to me, but I'm sorry... Earthbound. Earthbound forever and always,

Dora wins because she has the correct answer: Earthbound!

The only flaw I found with both Baldur's Gate and Planescape is the inability to play them on my laptop since I've now become a Mac user and want to play them again without having having to get trapped in the room with my PC.

I remember sinking nights and nights on these two games. I think they were the last RPG I actually had played all the way to the end, and in detail, exploring every nook and cranny and taking time to figure out the best combat strategies (without the Internet to hold my hand and solve all my problems). I tried many newer ones since, but all felt kinda shallow and repetitive in comparison.

I don't know whether Baldur's gate stood the test of time since I really have no time nowadays to play them through again... but whoever likes playing not for the graphics or action, but for the story - I think I can safely highly recommend it.

I wonder the same thing. I've mentioned chrono trigger and baldur's gate as the last games to captivate me, but it might be age related. There is a tendency to be ever more demanding as we grow older.

This is more clear with other genres of games. I used to love Streets of Rage, Contra etc (and I still play them through emulators, occasionally) and now I heavily criticize games like Crysis and Gears of War! But I'm pretty sure I would DROOL over these new games if I were younger.