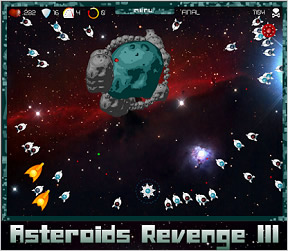 Ladies and gentlemen, what I'm about to reveal may shock and alarm you. It may astonish and disgust you. It may even rock (ha!) you to your very core!

Yes, it turns out there's a great injustice that hearkens back to the very roots of casual gameplay. What we thought was a mindless enemy bent on destruction turns out to actually be a peace-loving sentient race that only wants to be left alone. But people kept coming back again and again just to wipe more of these beings off the map; we pushed them too far, and now they are back with a vengeance!

I am referring, of course, to the seemingly unassuming Asteroids. It turns out they really don't like being shot by spaceships, and now one of them is taking action! In Asteroids Revenge III, you play the role of a blue-tinted asteroid up against all sorts of human enemies—shooting ships, repelling fields, space mines, and many others. Your goal is to wipe out the treacherous human fleet by crashing into all the ships while avoiding getting hit by their fire. Use either the arrow keys or the mouse for movement.

After each wave of ships, you get to choose one power-up. In addition, you can collect "ally" power-ups on some of the levels. These allies are fellow asteroids that circle around you, shielding you from enemy fire and extending your killing range. You can keep your allies close to you or send them circling further out with the Z and X keys, or with the mouse wheel if you have one. In addition, you can venture out without your allies by holding down C or the left mouse button. You'll need to use all of these tricks, as some enemies affect you and your allies in different ways.

Progressing through the levels is pretty easy, and you'll probably make it up to and past the 25th (boss) level without a lot of difficulty. After the boss, you'll enter an endless level, where the goal is to destroy as many ships as you can until you die—a final stand, if you will. After this level, your performance will be evaluated for high scores in three different areas: time taken to defeat the boss, total mass (life) at the time the boss is beaten, and total number of enemies destroyed.

Analysis: Apart from being a tad easy, this game is really fun to play! The variety of enemies you face is high enough that you'll have to employ a number of tactics to pass each level. However, the real test is at the end, when you have an unending onslaught of enemies thrust at you, forcing you to use all of your strategies on the fly.

Depending on how well you perform in the final level, you'll get one of four different endings. This gives Asteroids Revenge III a fairly high replay value. Trying to get onto each of the high score lists requires a different strategy, further enhancing the replay value of the game.

This is usually the point where I list off the things I dislike about a game, ways it could be improved. Truth is, I can't find any downside with Asteroids Revenge III. The gameplay is a good mix of fingers and strategy, it's complex enough to offer multiple playing styles, the replay value is high, and I haven't noticed any bugs or other annoyances. So major props to the designer, Adam Schroeder, for putting together such a great game!

You may also Play the game at the author's site

Note: Asteroids Revenge I and II are available to play on Kongregate as well, although you will find them rather one-dimensional compared to the third installment.

What an awesome concept... the narrative is fantastic. Can't help smiling.

Interesting that they decided to have an end-point. Ie, "you will not survive this last encounter."

I was a bit sad that the game ended when it did. I reached the endless (last) level on my first playthrough without really having to concentrate.

Still, the game has lots of potential, so hopefully a sequel will get made one day...

OMG totally awesome game! I just played my first round, and LOVED IT! It took me a little while to get the hang of it, and I died on the first boss, but I am going right back in to kick his butt! I usually avoid shoot em' up games, and I was SO thankful that this was anything but a shooter. But it gave me the satisfaction that I feel with a shooter without actually having to shoot at anything!! SUPER COOL GAME!!! FUN FUN FUN
I am usually a fan of any game that allows me to use only the mouse but after playing with the controls (with or without) it is far better to use the keypad.

Oh gosh, I just LOVED how simple this was relative to other games of this type. I don't normally do games like this but this one was just perfect for me.

Thanks for the awesome review and the comments!

I totally love that the main "critisims" are that the game is too short and "I want more". I can think of worse "problems" to have. :)

I'm thinking about building out more levels to the game and releasing them as "chapters". Maybe each one would have 25 more levels and continue the story.

Perhaps the next one would be:
Asteroids Revenge III - The Resistance Builds

With the escaped asteroids from the belt fleeing to other other belts to "awaken" them and rally them for the defense. The humans of course would be trying to prevent this from happening.

I have a lot of ideas on new mechanics and ways to expand on the gameplay.

What do you guys think of that approach?

I think a sequel could be a definite contender for the JIG flash game design competition #4...especially with the theme of 'ball physics'.

Really enjoyed the game. Thanks!

this game is very good, the controls, the power ups, and the allies it's all very good

Chapters sound good as long as each chapter offered at least one significant difference in the core gameplay mechanics. Maybe make one more puzzle-based (maybe having to finish each level with limited weapons or asteroid mass), one based on reflecting ships fire back at them, etc. But it sounds like you have enough ideas that this shouldn't be a problem!

PS, I third the contest suggestion.

I really quite enjoyed that game. BTW Jay, on a personal note, you get more point and click/escape games on the site. Keep up the great work.

If you set your armor high (REALLY REALLY HIGH) you'll eventually become a colossal space rock of doom at the last stage, unstoppable save for the unfortunately placed blue mine.

I have a good idea for the next game. How about next time the robots take over the humans and then the humans have to team up with us. You do the chapter things and once you finish them all the humans try attacking you with your own weapon..... asteroids.

Note: if you destroy one asteroid you die but if they destroy you they die, that's the hard part :)

Umm... does anyone have a stategy to quickly defeat the boss? The screen keeps filling with green bullets, shot from those annoying orange ships, which also fill the screen. And I can't avoid the green bullets because those gravity things in the corners make it hard to move. Even if I DO get lucky enough to hit that boss ship, the asteroid just bounces off!

I,m nine, and I found a bug. If you are big enough, and if you time it right, you can get two power ups at the same time!

Hehehe Woohoo! I feel so special. My strategy on the last two levels is to just let your fellow asteroids go absolutely nuts! It works too!, I mean it REALLY works -I just got 4th place on the high scores for today, my 1st time too! No, seriously! I guess the logic is whenever a big asteroid, or you, gets shot it spawnes a lot more little asteroids and whenever you smash a whole bunch of ships you get bigger, remember? This causes a constant stream of little asteroids destroying everything they meet, and you the hugey running around the border as fast as you can. Also, if you die you become an ally meteorite until there's none left. Eventually you do run out of allys bouncing around the screen though (hence the 4th)

Also I'm wondering when the next chapter's coming out. It's a great game.