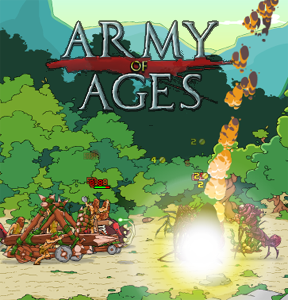 Here's a short synopsis of Charles Darwin's Origin of the Species, in case you don't have six dollars for the Cliff's Notes: Adapt or die. Now, that's all well and good for Dodo Birds and Humpback Whales, you might say, but what does that have to do with me? In Louissi and Mapoga's polished strategy game, Army of Ages, you begin as a lowly stone age clan when advanced alien insectoids invade your world. You'll have to evolve through five ages before you finally have the strength to take down the hive.

Each stage in your evolution will offer you first and second tier
build paths. To make money for units, upgrades, and turrets, you'll need to kill aliens and collect water. To collect water you need to build gatherers. There are only three wells you can gather from and the farther the well from your base, the more money you get for the water. But, if you can't push the alien horde far enough from the water source, your gatherers will be slaughtered. Each time you kill an alien invader you gain experience points. Build up enough XP and you can call on special magic attacks, and, most importantly, evolve to the next stage, which will open up stronger units and turrets to bring victory.

Army of Ages is built upon a great story and features a surprising amount of unit variety (Dragons!) and well balanced upgrade costs for a 30 minute flash game, but the game does have one annoying feature which can make the game seem impossible on harder settings: when you evolve, all your units and turrets disappear, but the aliens who were just attacking you don't, and you will have to quickly rebuild your army before they reach your base. Tip: right before you evolve is a great time to cash in on your magic attacks to clear the map and give yourself some breathing room to rebuild.

That being said, Army of Ages is one of those games that you almost feel guilty playing for free, since it's so well done. But there is always a flip side to a good game: it has to end sometime, and 30 minutes isn't enough time to do this idea justice.

A SNES throwback to E.V.O./ Tower Defense, anyone?? (said having NOT yet/ about to Play it, LOL.

This lovely game isn't loading on latest Firefox... just to check, I enabled everything, and loaded another game on JIG. Ads played. Am I missing something besides clicking the start button?

Hey Shudog, I'm having no problems here on my end. Game loaded after the ad, I clicked start, made a profile when presented with a save slot to choose from, and was given a tutorial before the game started. Latest Firefox here on Windows 7.

Same as Dora, except on Mac 10.5.8. I just loaded and played the game in the latest Firefox (12.0), so I'm not sure what to suggest. Have you tried a different browser?

I really like this game. I wish there were more levels to evolve through, but with the simplicity of the mechanic, it might get boring and reduce replay.

Did anyone else notice this?

No matter how much I evolved, the most effective special attack was the Arrow Rain, even as the most evolved army. It was the only one that would allow me to move forward against the aliens.

It's one of those things like we saw in some of the Gemcraft games where paying extra didn't always correspond to "better".

Thanks for the help, JIGsies. Here's the deal -- NoScript doesn't list an Armor Games here at JIG. I go to Armor Games itself, and I can enable the script there, and the game loads. So it seems like there's something missing in translation with the local copy.

Sounds like a malfunction of noscript since we are embedding the Armor Games file in an industry standard way. There is a means within the game to login to your Armor Games account, and you don't need to be playing on AG to do that. So, it's seems to be a failure of NS to recognize that as a valid operation. Those scripts and browser extensions are more trouble than they're worth, IMO. Especially from our perspective since we're always the ones to hear about it when they don't work, which is quite often.

If I sound bitter, it's because I work very hard to make enough money each month to pay my writers, and many times I come very close to not being able to. It's really quite stressful. So, the topic of ad and script blockers is a sensitive one for me.

A Weekend at Villa Apate