We at Weekday Escape do love our escape-the-room games. But, what is it, exactly, about being trapped in a room, desperately searching for clues to inexplicably situated puzzles, scrounging about for items to construct makeshift tools, all while an assertively jaunty tune juxtaposes our dire predicament, that has us coming back for more time and time again? It may be hard to describe but it does have so much appeal that there's even a Japanese game show based on the concept. Until you land your prime spot on the American version (currently being cast) of the reality program spectacle, you can practice your room escaping skills in Aries Escape: Episode No.004. 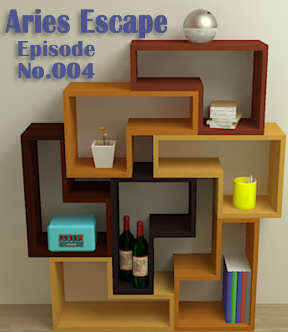 In this episode of Libertechno's game series, you're locked inside a small, studio apartment and need to gather an abundance of clues—colorful pieces of Legos, among other things—overlooking a fair amount of misdirection to solve the codes that will elicit your key to freedom. A changing cursor is a good friend in this situation, especially as certain items utilize tone-on-tone color camouflage to avoid detection.

Libertechno is no pal to the colorblind with this particular offering but does present a generous portion of exploration and code breaking to make our escape feel well-deserved in the end. While this episode doesn't feel as polished as Episode No.005, it is equally enjoyable. Again, there is a "perfect ending" in addition to the regular one although getting that special trinket is a simple matter of looking in the right place, a tad disappointing when you'd rather have a final puzzle to work out. Those who don't read Japanese will also lament the non-English opening and ending narrative, but the design is strong enough to compensate for lack of messaging.

It's only a matter of time before game shows such as Dero will be all the rage. In the meantime, we'll keep our skills honed by playing fun escapes such as Aries Escape: Episode No.004.

Note: to adjust sound, select the [tool] icon and move the bottom slider to the left. Keep the top slider, which controls click sensitivity, all the way to the right.

Here's something that stalled me out for a long time:

Anyone else having trouble inspecting items in their inventory? Is there a special way? Am I too blind to see it?

Try opening the options menu and moving the top slider all the way to the right. After changing that setting, you should be able to double-click an item in your inventory to inspect it.

screwdriver combining. the only 2 things i have left in my inventory is 2 things that look like tweezers but they both won't go into the handle. am i missing something?

First, you need to combine the two metal pins together in your inventory to make the screwdriver blade. Then you can add the blade to the handle to complete the screwdriver.

i can't press the buttons on the box to put in the code. anyone know what to do?

yeah i know. not long after i posted that i read the note and saw it combined 2 together. i never noticed it until then. sorry :(

The game will not allow you to enter the code until you have found all four sets of number clues hidden around the apartment.

The first clue is on the lid of the shoebox inside the left closet.
The second clue is at the bottom of the right drawer under the bed, hidden under orange blankets.
The third clue is inside the book with a key on its cover on the bottom shelf.
The fourth clue is on the back of the picture of fish found on the windowsill behind the red curtain.

Visit each location and then you can return to the box and enter the combination.

Hmmm... about the safe... I bet no one would ever guess what is being kept so securely;)