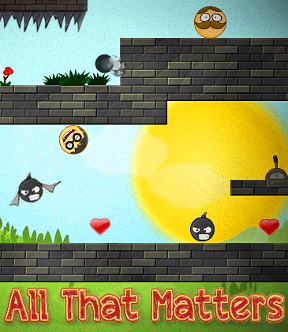 Dad is a word that evokes many feelings, isn't it? Family is another word that divides a room in opinion. Have you seen any recent Mel Gibson movies? Then you know that some fathers will resort to anything, even talking through a beaver hand puppet, to reconnect with spouse and progeny. It's not inconceivable, then, that a dad would also jump over flaming pits, bravely face blasting cannons and risk impalement on jagged spikes to bring everyone back together. All That Matters is the family's reunion.

Thus begins this unique puzzle platform game when a dad, Walter Greer, wakes up to realize his loved ones have drifted apart. What's your part in this? Using the arrows or [WASD] keys to move, you must guide the five family members through deviously-designed obstacle courses while, along the way, collecting as much love (a.k.a. hearts) as possible to reunite the Greer clan. The challenge becomes more arduous because each character has a distinguishing locomotive style that both enhances and limits his or her ability to navigate toward the goal. As a result, cooperation is more than just a nicety, it's requisite.

There are twenty-five standard levels incorporating a liberal variety of obstacles to maneuver through; in some you'll go it solo and, in others, you will need several Greers to finish. To switch between the cast, use the number keys or the old fashioned point-and-click method. As you play, you'll earn dozens of achievements for feats such as surviving adolescence or collecting hearts in bonus levels. Bonus levels? Correct! If that doesn't impress you, then go flaunt your very special game design talents by creating your own version of All That Matters with the level editor then share it with us. 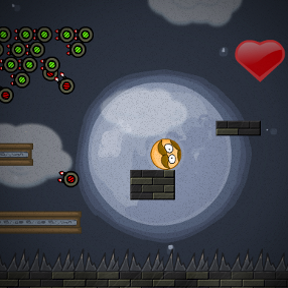 Analysis: Whew! There is a lot going on here and yet, instead of just being a jumbled mess of too much stuffing in one bird, it all joins together in perfect unity.

All That Matters' creator, Ali Bati, credits the inspiration for his game to The Company of Myself, Braid, and Limbo which isn't to say you'll find a clone of those games here. Instead, you can see the roots which sprouted the fresh ideas as well as the heart and soul behind his creation. Initially it might seem contrived as the framing of the narrative doesn't naturally jive with the action. But, family doesn't always make sense, does it? Besides, successfully overcoming the challenges really is soooo satisfying. Aspects of this same gameplay can be found in Ali Bati's Jack in the Box as well; nevertheless, All That Matters reaches loftier heights in every respect.

Beyond the greatness of customized and bonus levels, much fun comes from the diverse idiosyncrasies of the game's cast. Old Mr. Greer, as an example, is unlimited by gravity or the normal constraints of movement; that's great when you need to reach a hovering object, right? Yet old men are not particularly responsive to motor controls, either. You might decide to stop while Gramps just keeps on rolling. In any other game, unresponsiveness is a fatal flaw but here it makes perfect sense. Yes, it does become somewhat overwhelming at times. If you have a stubborn stick-to-it-ness, finishing all twenty-five levels is quite doable. Doing so while accumulating every heart on each level, however, will require skill, patience, and serenity (repeat after me: "I will not rage quit!") And you never know what unseen trickery awaits in the user-made levels.

At first you might question my enthusiasm and pass this off as another puzzle platform with an odd premise attached; just give it time and let yourself be drawn in. Consider the unlimited game play then, in a quiet moment of reflection, ponder the poetry of Walter's story as it resonates so deeply with anyone who has loved ones. All That Matters is not only creative and heartfelt, it's endlessly fun. When was the last time you had so much fun with family?

Play All That Matters

[Sorry, try it again. I typoed the URL at first. -Jay]

I loved it, but I don't see why it has an orange face. Weird ending. Explains the title more fully, anyhow.

[Orange face is for the violence -- impalement is bloody. While it's a tiny part of the game, it exists and some parents like to know that in advance. ~elle]

This game wasn't all that difficult or particularly rage inducing to get all the hearts.

What was rage inducing was the "Do you want to skip this level?" message that would keep popping up every few times I died on a level. This message was fine the first time - it was telling me about a mechanic I didn't realize existed. But when it keeps popping up over and over again it gets really aggravating. Why did they think that was necessary?

It was a very fun game otherwise though.

Nice game, but good lord why do all nice games just have to have one freakingly annoying, frustrating level with game mechanics designed to kick you in the groin, make you snivel in the dirt and beg for their mercy? It's even a case of Goddamned Bats, and the fact that that link exists should really give game designers a clue... I mean, really... (ノ ゜�"゜)ノ �"��"��"�

the gameplay was fun, but the constant "do you want to skip" was indeed rage inducing, as Regy Rusty pointed out.
Also, maybe it's just me, but I thought the story was suffering from an EXTREME someone-slap-him-in-the-face case of vomit-inducing melodrama.

"oh, my life sucks, ohhh my family doesn't love me anymore... OH WAIT LIFE IS AWESOME!". And then he promptly dies from the sheer force of the realisation of his idiocy.
(With some bombs and lasers in between)

Everyone has covered it, story oddly slapped onto a Lost Vikings style platformer, far too easy to get all hearts and the annoying skip message when you're repeating the few levels that are hard enough to kill you.

[It should be working...try again? From menu screen, you have two choices - top is music, bottom is sound (icons don't intuitively symbolize function). When in game, use [M] or click the sound icon. ~elle]

This game was short, sweet, and sentimental. It managed to bring tons of gameplay mechanics into one big bundle, without being overly difficult or confusing. But most of all it addressed priorities and bringing order to a dysfunctional family.

The controls seem very unresponsive to me. It's really screwing with my ability to jump over things.

Still playing but agreed the skip messages are seriously annoying, and over time on firefox is slowing down to unplayable

Hello everyone, I'm Ali Bati, the developer of the game. Huge thanks for the lovely words and playing the game!

There's a "don't show this message again" checkbox in the top right corner of those Skip Messages, you can click on it to never get that message again. I agree it's really irritating so I will reduce its shown ratio.

And huge thanks to JayIsGames for making such an awesome review...

@sihirbaz thanks - I had missed the message, guilty of just hitting continue! Enjoying the game though

I agree that the only thing rage-inducing is that annoying popup message asking you whether you wanted to skip the level. No, dear game, I don't want to skip the level. I understand fully you think I suck because I failed to catch that swinging chain five times in a row, but please let me play the game nonetheless. Thank you.

Other than that, and that stupid unnecessary emotional blackmail ending that I guess is supposed to elevate this game to some sort of art (it doesn't), I kinda dig this little platformer. I mean, it's kinda average - level design is uninspired, there's too many mechanisms yet none of it is really explored, yet it all ties up in a neat little package, perfect for killing half an hour.

But seriously, after you see all the family members getting impaled or burned (even the baby), the game author actually tries to evoke depth by killing off dad the narrator? Seriously? Why not murder the kids and sell the whole game as a hallucinatory experience of a devastated dad driven to insanity by sorrow? Imagine the art points you'd get for that little gem of an idea!

Controls are incredibly unresponsive on level 22; half the time I end up flying off in one direction unable to change course.

Level Father and Sons bug. Grampa died, and now am left with a screen that shows only the father... no background, no nothing... just black. Unresponsive to controls.

I found a fix for the skip level message:

Don't die so much

I didn't quite understand the "hidden" hearts. I think every level has 3 visible hearts (although some of them are very hard to reach before they expire).

Fun game, though. The metaphor and story are a bit odd, but I do like a platform game to have a little story. (The text in the intro is sooo sllooww to appeeaarr though :/)

Still, the game has lots to it, including achievements, bonus levels and a lot of replay value; each level isn't too hard to complete but may be a lot harder to get all 3 hearts on. 5/5!

I enjoyed the beautifully written story to this. The game accents it quite well, too.

A father whose family has separated themselves and forgotten each other, and a loving father who will always care for them, even if they are far, who will always love you, even if you turn away. This is even expressed in-game with how his wife when he is in control will never follow him, but when he looks upon her and you control her, he moves in unity with her, because he cares, and he loves her.

And then, when he finally re-unites them all and shows the love he holds for them, he's gone. In an instant.

And you reflect and remember how much it all mattered, and how much he loved you, even if you turned from him.

The game is fun in itself; the story is strong, and the moral is clear. Rage-inducing is hard to mention when a game invoked so much emotion as this in me.