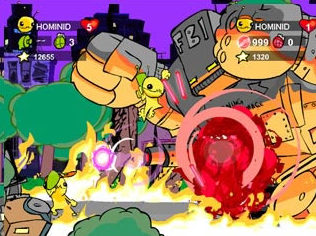 I've been hearing a lot lately about this game, Alien Hominid: a fast-paced 2D side-scroller in which players must run, jump and shoot their way across the globe in pursuit of the alien's coveted UFO. Also sporting 2-player madness, this game is a truly original title with outstanding hand drawn cel-shaded graphics and animation.

Apparently they had a really good showing in San Diego at Comic-Con last week, and the Web has been all a buzz with talk about the title since then. Publisher O~3 Entertainment—headed by Bill Gardner, former president of Capcom North America—has picked up the title to be released in North America this November, and IGN is reporting the game will be available for both Gamecube and PS2 when it is released.

Alien Hominid was originally conceived and developed in Flash and released on the Newgrounds.com website in August, 2002. Since posting the game on Newgrounds, it has been downloaded over 6 million times! All of the art was created by Dan Paladin (synj), and the code was written by Tom Fulp, the creator of Newgrounds. Together they have joined with The Behemoth, a small group of games industry veterans, to bring their creative and original Alien Hominid to the console games market.

For the console version, the developers have completely re-drawn and re-coded everything from scratch. The sprites are larger, the frame-rate is faster and the explosions are "endless." I'm excited about Alien Hominid, as it is vaguely reminiscent of Viewtiful Joe's 2D side-scrolling cel-shaded style. That is where the similarities end. See for yourself, check out the Flash version in the meantime.

Jay, this game is great. Only one quip, just a little hard to navigate. I think i would prefer the jump button to be the "up arrow" :-)

I think the reason the jump button is not an arrow key is to allow the player to shoot down while jumping up. But I agree with you in that a game should allow the player to modify the controls, as necessary, to provide a more comfortable arrangement. Maybe this game will work better as a console game afterall, considering the use of a handheld controller for the rather complicated controls.

this game is pretty sick but the way the life works is kind messed, personally I would prefer a health bar, because getting hit once and dying is kinda lame.

I played the game. Just awesome. The console must be the best. Hard and challenging. Just perfect.

health bar would be nice i cant even get anywhere...

my favorite flash game of all time! I finally achieved a perfect game...beating the final boss without losing a life! http://mywebpages.comcast.net/socrtaz10/hominid.jpg
if ya dont believe me

I think this is far too derivative of the metal slug series to ever deserve the acclaim that is showered upon it constantly. Admittedly it's still fun, despite this lack of originality.

Great game, but the bad guys need some anticipation before they shoot.

Now the King of Town knows about "That Yellow Thing!"

jay- have u seen the new game by synj? its on ng, called "dad n' me" its really cool. check it out

Alien Hominid is also coming out for the Gameboy Advance on February 3rd in the UK. No US release date set.

here is a tip

i can't beat it someone give me a guide

@silverthing99:
1.do you mean the yello dello or what?
2.are you ASKING FOR A CHALLENGE???