If you've ever tried to write something, you know how rewarding and challenging the creative process can be. When it comes naturally it's the best feeling in the world, but if you try to force it you can feel like you're fighting something that hates you... figuratively speaking, of course. Renowed writer Alan Wake knows that feeling better than anyone, and with his agent and his fans breathing down his neck two years after his last book, writer's block is starting to feel more like writer's noose. But sometimes the stories we tell or find ourselves in aren't always up to us, and Alan's vacation to the idyllic mountain town of Bright Falls with his wife Alice takes a nightmarish turn for the surreal in this action adventure game from Remedy. 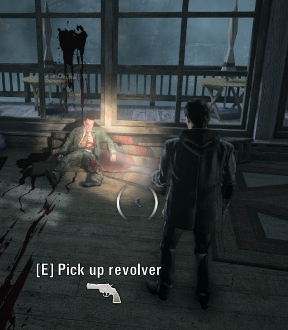 When Alice vanishes after an argument, Alan regains consciousness to find himself alone and bloodied in the middle of nowhere, with no recollection of how he got there, or where Alice is. Things get even stranger when he starts finding pages to a manuscript... one bearing his name that he doesn't remember writing. Especially when the things within those pages start coming true. With everyone doubting Alan's sanity, including Alan himself, will the truth be stranger than fiction? Or will Alan even survive to discover it as the darkness in the sleepy little burg of Bright Falls and its inhabitants begins to grow? Only Alan and the one person who believes him, his sidekick Parka McNot-as-Good-as-Zeke, can find out.

Use the [WASD] keys to move around, and the mouse to aim and fire if you've got a gun equipped. Holding [shift] will let you sprint for a while until Alan runs out of breath, and using [shift] in conjunction with one of the directional keys will cause him to dodge that way. [E] interacts with objects, while [R] reloads, and you can tap it to speed up the process if you're feeling the pressure. Along the way, you'll find a variety of firearms and flares you can swap between using the number keys or mouse scroll, and I'll tell you right now you can ignore those finely honed shooter hoarding tendencies I know you've got. Since the game is set up in a series of six episodic chapters, Alan typically finds a way to contrive losing most or all of the weapons and ammo you have stockpiled between each one, so don't be afraid to spray hot shotgun death when things get hairy.

Most enemies you'll encountered can't be harmed until you deal with the protective darkness shrouding them, but luckily for you, you have history's deadliest weapon at your disposal... and you're packin' double As. Aiming a flashlight at an enemy slowly burns away the dark, and holding down the right mouse button boosts the beam to speed up the process at the cost of faster battery drain. When the light has beaten them down, you'll finally be able to put them down for good with whatever weapon you have on hand. Alan's health is displayed around the radar in the top-left corner, so you'll want to avoid getting hit whenever possible and seek out safe places in light for faster health regeneration. Of course, if you do take one too many whacks, it's not the end of the world; the game operates on a checkpoint system, so you'll just be kicked back to the last one you passed. Checkpoints are typically fairly frequent, fortunately, so even if you take an axe to the face you won't lose that much progress. 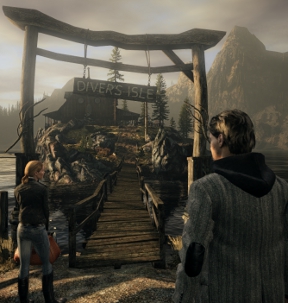 Analysis: Alan Wake is, first and foremost, a great story. Invoking everything from the works of Stephen King to classic schlock like the Twilight Zone or Tales from the Darkside, and even modern day thrillers, it's a scary and engaging wild ride. While it delivers its share of predictable jump scares, a lot of the fear in Alan Wake comes from the unknown as it melds the supernatural with the everyday to create the downright bizarre... like the ax-wielding maniac chasing you through the forest shrieking about non-refundable deposits or keeping your pets leashed at all times. It's a wonderfully weird and intriguing story, and even if some elements feel familiar, it If you go hunting around, you can even watch short episodes of a little show called Night Springs that delivers a different little scary story each time... some of which make more sense than others, but hey, most mountain cabins don't even get cable, let alone haunted cable, so show a little gratitude.

The game is, as a whole, pretty darn good looking. Environments are stunning with some of the best light effects you can hope for. You will spend rather a lot of time running around in the forest with a flashlight, but the stunning attention to detail that packs the woods with atmosphere and foreboding makes it hard to be bored. Characters are likewise well modeled, though watching them talk is about as realistic as watching a pair of sock puppets jaw at each other. Voice acting is sort of hit and miss in that some actors seem a bit more into it than others, but the Taken people you encounter can be flat-out terrifying with their bizarre ramblings and worn-out tape recorder voices. Sure it would be nice if most enemies were varied beyond "guy with a sharp thing" and "slightly bigger guy with a sharp thing", but by and large Alan Wake is so good at creating tension and panic that more set pieces will be the last thing on your mind. 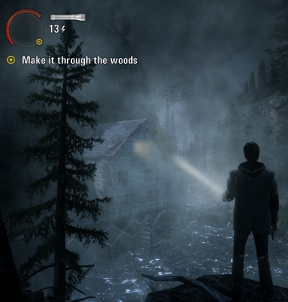 Since Alan Wake originally started on a console, the biggest issue a lot of PC gamers might encounter is the odd, over-the-left-shoulder viewing angle the perspective takes. While you'll get used to it, it's sort of like being drunk on a cruise ship, only the cruise ship hates you and is trying to kill you. The light as a weapon mechanic isn't really that new, though Alan is at least better at it than ObsCure ever managed to be. Combat in general has an appealingly frantic feel to it, but what it lacks is a fluid feel. Okay, granted, Alan is a random schlub and not Leon Scott Kennedy, but come on... who plays video games to be reminded of their own inept fumbling? The shoulder-mounted camera works fine for exploration, but in combat situations with multiple foes where you're trying to stay light on your feet, it just feels dizzy and disorienting, especially combined with that drunken dodging.

Alan Wake isn't exactly a perfect game, but it's still a very good one. Despite a strictly linear progression and action sequences that occasionally drag on for too long, it still manages to keep the story roaring along thanks to a likable cast and plot twists aplenty. It has an extremely cinematic style, and it definitely has potential for a lot more beyond even the upcoming PC port of the standalone title Alan Wake's American Nightmare. If you're big on thrillers with supernatural twists, Alan Wake's story will likely keep you glued to your chair 'til the end. If you want to visit Bright Falls again, you can check out the short, six-episode live action web series that acts as a prequel. It's also a great way to find out if you're interested in the tale the game has to tell. If you've ever tried to write anything yourself, you'll probably sympathise with Alan's own creative frustrations. But even if you haven't, Alan Wake is a solid and exciting horror thriller that's well worth checking out.

I resent to Twilight Zone being referred to as schlock.

Pulp maybe, but not schlock.

Since when is Alan Wake a casual game? Not that it's a bad game, but it's a full-budget title and the action gets pretty intense; it hardly even resides in the same universe as games like GROW and Angry Birds. If JIG is going to start reviewing games like this one, why not review Skyrim? Dark Souls? (Now THERE's an idea!)

Nobody said Alan Wake is a casual game, and nowhere do we say that we only review casual games. It wasn't the first time we reviewed a more hardcore gameplay experience here, and it won't be the last.

I thought you guys do casual gaming since you've advertise them on top under the Robot Wants game and basically have it as a secondary name.

That depends on your definition of "casual". :) We have reviewed a LOT of in-depth, complicated, difficult, or otherwise "non-casual" indie and browser games over the years. If something is good, and we CAN bring it to you, we want to do so.

That's because Casual Gameplay is the parent company of Jayisgames.com.

I'd agree with RedMug that "New Casual Game Releases" suggests new casual game releases and I've always thought of JiG as such.

Knowing the parent company has also never been a pre-requisite before for understanding a website's focus.

In any case, this looks like a great game. I just wouldn't necessarily expect to discover it via JiG.

The Web is a moving target. It has changed and evolved a great deal since I first started the site almost 10 years ago, and we'll keep changing along with it. So expect the unexpected from us and don't pigeonhole us, please. We won't soon turn our backs on our core audience, but you just might see us open our arms to welcome some new ones, too. And the "New Casual Game Releases" you referenced is an advertisement.