All Acid Bunny wanted was a lovely day at the beach with his friends. Unfortunately, while playing volleyball, his intense hallucinations resulting from his bunny mother's drug use while he was in the bunny womb, have led him to mistake Mr. Panda for a ball that needed serving and spiking. With Mr. Panda now in pieces, Acid Bunny knows that it his duty to put him back together again, no matter how many of his bunny brothers will try to stop him! The sequel to the surprisingly enjoyable original Acid Bunny, Seething Swarm's Acid Bunny: Episode 2 continues the action platformer series' hallmarks of being adorable darkness and dark adorableness. Please be aware that though it may not look like it, this game contains material some might find disturbing, including drug use and suicide. 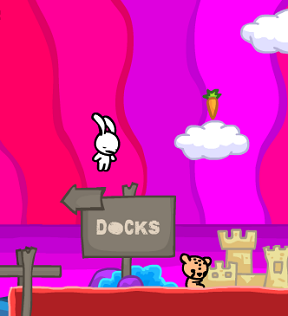 Move, jump, and double jump with the [arrow] keys, exploring the world around you, collecting the 24 spools needed to resurrect Mr. Panda, along with his missing head and torso. To get some of them, you'll need to pick up the sea shells scattered about, which can be traded for admission into minigame competitions with spools as the grand prize. There are enemies to be bopped, or your can throw carrots at them with [A]. There are various vehicles and items you can ride, which you'll enter automatically, using [S] to dismount. There are also mushrooms to collect, which will allow you to see the magical portals that will take you to bouncy trippy bonus game land... maaaaaan.

Acid Bunny: Episode 2 is near-identical to its predecessor in tone, plotting, and mechanics. This is the kind of episodic gaming that exists not to tell an overarching plot with constantly evolving challenges, but rather because a developer had too many ideas for a single game. Still, platform games have a long history of being divided into thematic worlds, and even if Episode 2's main innovation is but pushing the formula into Beach World, Ocean World, and Jungle World, the hopping, bopping, collecting, and puzzling is as enjoyable as it ever was, and the influx of minigames gives it a nice Banjo-Kazooie feel. So while Acid Bunny: Episode 2 isn't quite as fresh or as shocking as the first installment, its quirky off-beat humor, quality level design, and variety of challenges make it the fix fans of the first had been craving.

Great game. I like it better than episode 1.
At least, easier

A great improvement from the episode 1 is the save!

Hate the instant death in water.