This game received its rating of O for mild pixelated violence and blood.

The spectral star of Tin Sleeves' puzzle platformer A Ghostly Journey is dead but not quite lovin' it. After a few years of happy haunting, he (she?) has begun feeling more and more restless, and has finally decided to leave the cemetery. Just because you're incorporeal doesn't mean you've got it made, however, but luckily for our ghostly hero, you can get by with a little help from your friends... and by friends, I mean the people you're possessing. See, as a ghost, you can pass right through physical hazards like spikes, but you can't manipulate physical objects you may need to in order to get to the portal to complete each level, which is where your hapless, oblivious meat suits come in. Using [WASD] or the [arrow] keys to move and jump, stand on top of a human and press the [spacebar] to gain control of them, and press it again to release them, gaining a nice upward boost that can help you reach a high place when you're ejected. Humans can manipulate switches with [X], but they're also bound by the limitations of being squishy meatbags... spikes hurt, naturally, and some of them are faster and stronger than others. Plus, whether you're possessing someone or not, you always need to watch out for light sources, which will damage you if you get too close. Of course, it's not just humans you can possess, and later on you'll have to watch out for other dangers like ghost hunters, too! 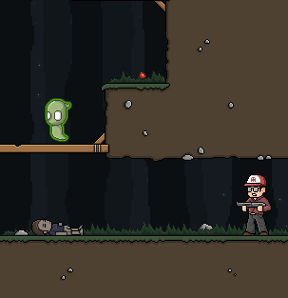 Possession as a gameplay mechanic isn't anything new, as games like Why Am I Dead? have proven, but A Ghostly Journey still manages to make it feel fun and clever by differentiating between the size or strength of the bodies you're inhabiting. Sometimes platforming difficulty feels like it ramps up faster than the puzzle solving does, which might leave you wishing like it was the other way around, or at least more carefully balanced betwixt the two. It's easy to wander the wrong way in a stage and get stuck, thus prompting a restart with [R], which will boot you back to the last checkpoint, or to the beginning of the level if you haven't reached one yet. The checkpoints themselves can also feel like they're used too sparingly, so you'll still wind up being forced to repeat a chunk of whatever stage you're plugging away at... something that can be especially frustrating if you're stuck on something at the very end of a level. Mainly because whenever light touches you, you slow down, so a hit that should have been a glancing blow turns fatal since you can't spring away as spryly as you should. As a result, A Ghostly Journey is a good looking and intriguing little puzzle platformer with a lot going for it and a significant chunk of challenge, but one that might be too unforgiving for some players. Stick with it and you'll find a game that continually pushes your abilities by throwing in new elements, though don't expect it to hold your hand. Mainly because ghosts can't hold hands, you insensitive jerk.

[Link removed. If you have an issue with a game, please don't drop links without any context to other sites.] - Ed.

Is anyone playing this?

sorry about my previous comment.
this game 'reminds me' Infestor by Woblyware.

@Cyberjar88:
Just (FINALLY) finished, after god knows how many undeaths, restarts, and deaths that I've had to go through.

Granted, I was playing perfectionist mode - I purposely aimed to get the soul on each level on my run, so I was playing hard/super-hard mode - the game seriously makes you "work" for some of the souls and alternate exits. Heaven forbid, some of the last souls are just outright evil in the process of obtaining them. And most of them require perfect timing and platforming, as most of them require a human host to stay alive on the eventual return trip.

And when you DO manage to save every soul and unlock the extra stage that requires all the souls....

Well, you will be disappointed. VERY disappointed. No second ending, not even a bleeping "Thank You", and the character even mentions this! For (censored), I've sacrificed my entire half-life rescuing a posse of souls

just to release them ALL and none of them stop to say "Thank You" or do anything.

There needs to be some sort of PSA for Flash game developers: "Up, left, and space can't be recognized simultaneously by most keyboards."

Other than that, I'm enjoying the game.

@bill yeah, unless you have a high end keyboard, they do that to stop 'key shadowing'... is rather annoying and complex, but it makes keyboards cheaper to produce.

A nice touch is that "stunned" humans are visibly breathing, just in case you start worrying that the ghost who's so concerned not to hurt his "hosts" is leaving a trail of corpses.

Good thing the letter key B is an alternate control for space. That solved the issue of not being able to move/jump when possessing people, at least for me.

This game became one of my favourites games! Good work!