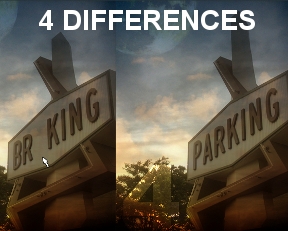 Who doesn't enjoy looking at two seemingly identical images and spotting the subtle differences between the two? Why, the last time I saw a pair of identical twins, I may have weirded them out when I crossed my eyes and murmured "Aha, the eyes don't quite match up, I better click on that." But luckily I paid my bail in time to catch 4 Differences, the latest installment in one of the finest spot the difference series out there.

The control scheme is pretty self explanatory. Look for places where Ivoryboy's gorgeous visuals don't match up, and click on them. The eye cross trick doesn't always work because sometimes the pictures are stacked rather than side-by-side, and sometimes they are mirrored.

Although this installment is just as beautiful as the previous 5 Differences and 6 Differences, it's lacking in some of the satire and symbolism that made 6 Differences in particular compelling. 4 Differences doesn't seem to have much to say; it's content just to show us some pretty pictures. The four differences in each scene are also the same every time you play through the game, which severely hampers replay value.

That said, this game is still miles above most other spot-the-difference games. Its visual presentation alone makes it worth a look. If you like the genre at all, you won't want to miss it.

No picture for this level as the level loops, making screen captures difficult to express what is happening.
missing windmill
mesa in distance
part of bush near mesa
cloud over mesa and bush

Picture not very helpful for this level.
Arrow on sign
Stoplight
Loud-speaker (in tree on left side)
Cloud (right next to top of tower)

Great game.
The mirror effect and "moving pictures" is an entirely new aspect on find the difference games - at least, I haven't heard of anything similar.

Wow. These games are getting more and more ambitious.

I thought I played a game just to play another point-and-click game.

I discovered an art!

I've played this game on Kongregate already. Beaten this game yesterday. Wasn't too hard after all.

Simply gorgeous. For a spot the difference game to be that good to look at and to have a soundtrack which could raise emotions...

After playing through the first few levels, I closed the game. When I returned a half hour later the game doesn't load. All I have is an image of the sky with some clouds and the number 1 in the upper right corner. If I move my mouse in the window, the image moves slightly.

Good game. My only gripe is that it was a little short, but I personally liked the lower difficulty compared to some other "Spot the Difference" games. It looked and sounded nice too. The mirroring and moving levels took me a minute to wrap my mind around them, but once I understood them I found them great fun.

thank you for reviewing this. I have loved the entire trilogy (thus far) and feel they turn the spot-the-difference game into a an atmospheric and emotional experience. I personally found this to be my favourite so far, perhaps because of its simplicity and beauty. I guess by the time they reach '1 Difference' they will have somehow transcended the entire genre?

Absolutely beautiful!!! I usually love the sopt the differences games, but this one took it to a whole other level. Loved the moving ones in particular.

No picture for this level as the level loops, making screen captures difficult to express what is happening.
missing windmill
mesa in distance
part of bush near mesa
cloud over mesa and bush

Picture not very helpful for this level.
Arrow on sign
Stoplight
Loud-speaker (in tree on left side)
Cloud (right next to top of tower)

Gorgeous game, but those moving levels made me feel seasick!

I love the moving levels. Especially the last one, as it walks you through a landscape.

For me the best part of this game is sound. Did you notice that anytime you spot difference, sound-click is perfectly matched with music? In this game music is not just nice background to mute...

Same problem as Zeke for me, game not loading. Any ideas why?

Strange! I got to the last level but it wont load!!! is it just me with firefox or???

Today it loaded and am I happy!!

Thanks for all the help!

HEY i got the same problem that the others had. game wouldn't load.

How i Fixed it: i just deleted the internett log. maybe the game is made to don't load 2 times a day so you can remember what you did last time.

it always gets stuck on the house level , the reflected mouse wont move , i looked up were the differences are on that level and its already done but it wont go on to the next

i liked the nebraska state capitol building, could just be being from nebraska though

I agree with Mr. Mister. It was really cool to see the Nebraska state capitol building but it also could be because I'm from Nebraska. LOL. Overall 5/5 for the game! :)

Thanks for the walkthrough assistance, but you do realize that isn't a "rag" on the sidewalk by the house, don't you?

This raises the game to the level of art. I can imagine seeing these images in a video art gallery. But the people who call it an an easy game are liars. The Rorschach inkblot test almost drove me crazy. But I still love it.