Clash of Clans has been played by more than 100 million people for iOS and Android! Check out our best tips in our top ten "Must Know" for advice on how to keep your resources safe from other players, how to make the most out of an army (for the least cost to you!), the advantages of joining a Clan, and much more! Have a tip YOU think is a "Must-Know"? Share it in the comments below!


Must-Know # 10 - Look for matches early on! After creating a good base, training on single-player games, and just after the first 72 hours Shield that protects you from attack is down, you can start matchmaking. This is the quickest, best way to gather resources for your village. When you start matchmaking early, your opponents won't have a lot of defenses or a high level Town Hall, so you shouldn't have much trouble winning. Don't forget to keep some Gold in your pocket! You can pay to skip a match you don't like, so you can find a better fit for your army and skill level. Here's one last thing... you farm resources from other players, so be prepared to be farmed too! After all, you're open to attack just like those you're farming for resources, but thanks to the lower level Town Hall penalty, you won't be attacked much when you're first starting out, or lose much of your resources when you are. 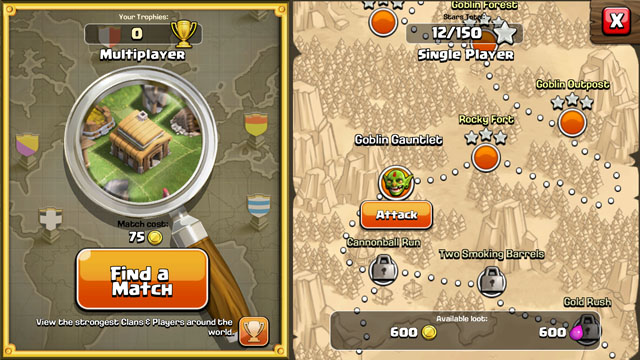 Must-Know # 09 - Understand how every unit can attack and move.

In order to be effective when you attack, you need to know how your units will move and act when you deploy them. Here is a little help:

Note: All units, with the exception of Wall Breakers, will ignore walls unless they don't have an available path nearly. 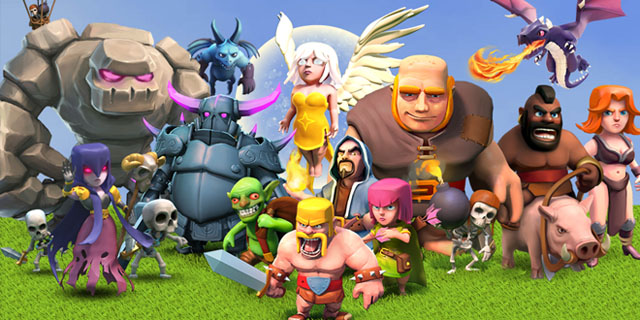 Before an attack, you should decide what you're trying to get out of it. Gold, Elixir, Dark Elixir, Trophies? Your army's composition should change according to your objective, as an army aiming for Trophies will be much different from one organized to farm resources.

If you want your village to develop and become more powerful, every attack should have a goal in mind for maximum efficiency, such as a fixed amount of Gold, or a certain number of Dark Elixir. Don't be afraid to skip until you find the perfect match, though sometimes you will have to spend a lot of Gold to find a match with the best rewards. Don't be too greedy, however, because it can be difficult and expensive to find a match with the exact right type and amount of resources you want. 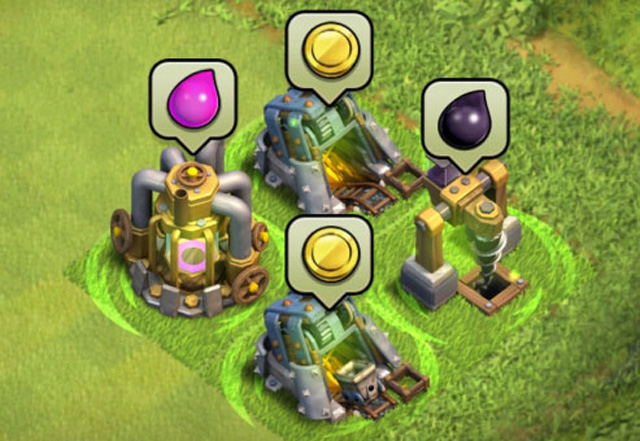 Must-Know # 07 - Save your Gems for at least FOUR Builder's Huts!

Gems are a precious resource that should be saved whenever possible, so using them wisely is crucial for those that don't plan to spend real money. The Clash of Clans tutorial will suggest you spend Gems to speed up your builds and upgrades, but it is wiser to just wait for them to build on their own. Instead, save them in order to get the maximum number of Builder's Huts you can. The more builders you have the quicker, you'll be able to build/upgrade your village!

You gain Gems by either buying them as an In-App Purchase with real money, or finding them by clearing your map of debris such as flowers, trees, rocks and boulders. The debris will slowly regenerate, giving you multiple opportunities to discover free Gems again and again.
At the end of the tutorial, you probably have around 200 or more Gems if you've been saving them instead of spending them as the tutorial advises. The third Builder costs 500 Gems, which you won't be able to afford right away. You can, however, complete an Achievement called "Sweet Victory" that gives you 450 Gems... it requires you to get 1,250 Trophies from attacking in Multiplayer Mode. The fourth Builder costs 1,000 Gems, and that will take a few months of playing to get using Clan Wars Achievements, rushing to Crystal and Champion leagues, and keeping clearing your map of debris. Be patient, and save those Gems!

Must-Know # 06 - Save your Elixir from Attacking raids!

Train your troops to fill your training camps. When there is only one troop left to train, during his training, start training your most expensive troops... the game will pick their Elixir training cost from your storage, but your training camps are full, so these troops will be queued and not train, BUT your Elixir will still be alotted to those queued troops, and thus safe from raids. To recover the Elixir, just cancel the training of the expensive troops.
An attacker can steal 20% of your storage without Town Hall bonus and 50% of your collectors, as well as 10% of your Clan Castle, so obviously any resources not immediately needed and obtained thanks to Clan Wars should be stored in your Castle to minimize losses.

Must-Know # 05 - Place your Town Hall outside of your base!

Getting attacked by other players is part of the game, but if you don't want all your base destroyed whenever someone else attacks you to get a Victory, you should place your Town Hall outside of your base.
Every time someone destroys your, Town Hall they get a Victory and Trophies. At the same time, YOU lose Trophies, but less than if all of your base had been destroyed, and in addition to protecting your resources, you get a 12 hour Shield. Most players who find a match with a Town Hall outside of the base typically understand that person wants the 12 hour Shield, and thus should only destroy the Town Hall and then surrender to get their League bonus. It's very profitable for an attacker, because they spend only a few units to quickly obtain Trophies and their League bonus, and they can find another match immediately after. 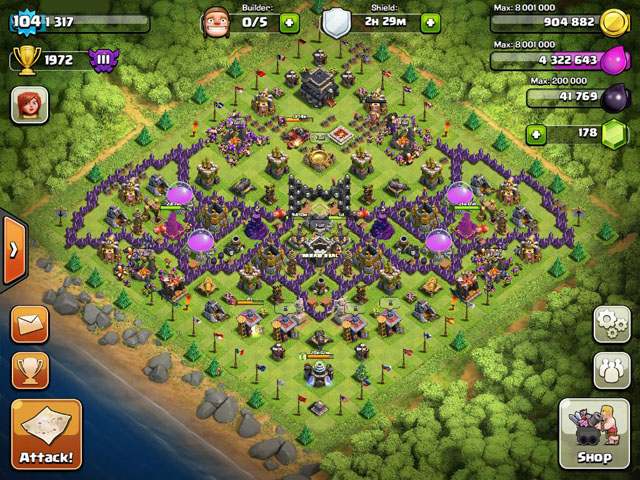 Before finding a match, you must know the cost of your army, including spells. After all, why attack a base with a lot of expensive units to get less than their cost in resources? Using a cheap army and your spells sparingly can be very profitable. An army made up of a mix of Giants, Barbarians, Archers, Goblins is quite powerful and inexpensive, and will take much less time to train compared to armies with Dragons, which may take several hours.
If you have spells, you don't have to use all or even any of them during your attacks, so make sure to save them, as when your Town Hall is of a higher level, your spells become more costly!

Must-Know # 03 - Place your Clan Castle in the Center of your base!

To be part of a Clan is in the core of Clash of Clans, so we recommend you to join a Clan quickly. The Clan members can hopefully give you advice, tips, and help you to design your base. Once you've joined a Clan, you can use your Clan Castle to ask for troops. These troops can help you during an attack, but they can especially help you to defend. A Clan Castle is the best Defensive Structure, since it has a lot of hit points, a long range, and can contain powerful units and more OF them the bigger it is. As soon as you're in a Clan, you have to rearrange your base in order to place the Clan Castle in the Center of your it. Don't place it outside of your base, since it allows other players to easily lure your Clan Castle troops. Another good thing to know is that a unit from your Clan Castle, who is not killed during a defense, goes back into the Castle and will available for the next defense or attack and with full life. Finally something very important is that you must upgrade your Clan Castle as soon as possible according to your Town Hall level.

In the beginning of the game, you must clearly define your strategy about how to gather resources... using your collectors, or attacking a wealthy player.

Must-Know # 1 - Maximize everything before you move to a higher Town Hall!

Before going to a higher Town Hall don't forget to max everything! If you rush to a higher level too quickly, your opponents will be stronger and well armed to attack as well as defend themselves. While you farm some Gold to upgrade your Defenses and/or Walls, you will collect some Elixir too, and you'll be able to easily upgrade your Barracks, Spell Factory, and so forth. If you are patient and take your time to upgrade all your troops and spells using the Laboratory, you're golden!

While your Town Hall is upgrading, try to fill up your storage so you have enough Gold and Elixir to create the new buildings that will become available, and start the first upgrades such as Laboratory and Army camp. Of course, some players will attack you during this Town Hall upgrade period because you'll have a lot of resources but remember... that's all part of the game!

Copyright © 2015 Jayisgames. All Rights Reserved. Do Not Copy. Protected by Copyscape.

When it comes to strategy games, no one can beat clash of clans. But when there are limited resources. Some poor freebies get annoyed when they have less resources. But you can also get these resources free by using coc private servers.