Voting is now closed. Results are up! >>

And the sun didst set upon another year. But whilst we travel bravely into 2012, blinking uncertainly but hopefully into that great blinding light that is the future, let us not forget... 2011 frickin' rocked, dude!

That's right, dearly beloved, it's that time again... for you fine folks to vote for your favourite games that we covered during ye olde 2011.

We've toiled for days (literally. literal toilage) to compile lists of all the games on the site that were not only the highest rated by you, our cherished readers, but also those we personally felt deserved mention. And let me tell you, there were a lot of games that were deserving; we saw a lot of new talent create amazing and memorable titles, as well as favourite familiar creators grace us with more of their high-quality work.

But now we need your help. (Imagine me projected from R2-D2 as I say this. I'm going to be imagining it.)

Starting today, you'll be able to vote for your favourite games in each category from browser to casual downloads, and indie games to mobile titles, once per day. Voting runs from January 11th through January 25th, and at the end, the titles you love the most will reign supreme and be showered with love, adoration, ponies, and chimichangas. 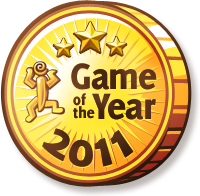 And this year we have added something new: voting for a single game to earn the coveted and prestigious title of Game of the Year! That's one single game across all 32 categories of games that we covered in 2011. You will be given the opportunity to cast your vote in any of the categories for the one and only, Game of the Year. Just check the box at the top of the page above all nominations. It will look like the example below:

Is there a game you feel personally deserves to be recognised as the very best of all from 2011? Then start voting and spread the word!

2011 was a fantastic year for creativity, with more developers than ever before making games that pushed the boundaries of their chosen genre, and some that seemed to defy neat classification altogether. To that end, trying to decide in what category to put some of these games was a bit of a nightmare, and one that was only resolved with a lot of thought, debate, and no-holds-barred cage fighting. If you find a game you believe is a different genre than the one we've placed it under, please remember that we tried our best to place them as accurately as we could, and also we love you very much.

It's obvious that the developers of these great games are the heart of the site, without whom we wouldn't have jobs, but if that's true then you, dear reader, are the very soul of it. Because you keep coming back to us each day, sending us your feedback and the games you find, and creating such an amazing, good-smelling community of clever, helpful people, this is a place we're proud to be a part of. Thank you for your time, your affection, and here's to many more years to come!

But hey, who cares about that, right? On to the games!


Here are the categories:

"where is 2012?" is not a point and click adventure, it's a platformer puzzle.

Omigosh I have to play some of these games! I guess I was busy...

To January 25th, eh? So I can't change my vote, but I can just vote differently the next day. Yes?

@ Shudog: Yep, that's correct about voting. You only get one vote per category per day, but are free to choose a different game each day.

It hurts my little gaming nerd soul that I'm going on vacation early Saturday and will only be around for one more day to vote. Some of those categories were packed with awesome games, and I can only vote for one at a time! *sob*

I fight dirty. There were trained ferrets involved, and I scattered little pieces of Lego around for people to step on.

Hrmph. It wasn't the Lego pieces that brought me down, it was all those colorful little ponies with their creepy cheery eye twinkles (so very distracting!)

I didn't like doing all that skipping (no mobile gaming from me), but I'm glad that I felt that I could vote on more games this time around! Last year made a bit of a choosing problem for me (i.e. I didn't play enough or not enough games were nominated).

elle, we should have been prepared for it after Pony Mondays. The horror... the horror!

kenshiro, fortunately all the mobile games are at the end of the list so you can stop as soon as you get to that section! :)

Where's Dr Wood from The Asylum? I know it's an old game, but it's a new character/episode. It gets my vote

[That one is in the Point-and-Click Puzzle category. -Jay]

[I've fixed these 2 instances. If you notice any more please let me know. The games that appeared in Weekend Download instead of getting a review of their own had to be processed manually, so there's a higher probability of error with those. -Jay]

Thanks Jay. The Asylum has to be my all time favourite :)

Why am I sometimes sent back to the first page instead of the next category when I vote?

[That should only happen when voting on the last category, Mobile: Simulation or Strategy. If it's happening on other categories, please list which ones, along with your OS and browser version, and I'll try to reproduce the issue. -Jay]

I don't think there's a point in making a list of the categories. It's completely random. Going back and voting again a few times eventually works and takes me to the next category.
I'm using Windows 7, Firefox 9.0.1 and iOS 5.0.1, Mobile Safari. (Got the problem on both)

Hi Cams. Have you tried another browser? I'm using Windows 7 and Chrome and haven't experienced an issue. Sorry you're having problems. :(

@ cams: I've experienced that too, but it seems to happen when I try to vote before the page completely loads (my internet can be slow sometimes). Maybe that's what's going on for you too?

If that's true, I can probably disable voting until the page loads completely.

It also may be likely that votes are not getting tallied correctly if you vote before the page has loaded in its entirety.

I've voted on a lot of categories and lemme say that, whoever wins, you did an AWESOME job in making so many types to fit so many different games in it. The only thing I'd not agree with would probably be DJManiax as a webtoy/sandbox, but it got my vote anyway.

And of course, I'm rooting for Snailiad as GOTY!

When will the results be announced?