Whether your New Year's resolution is to get rid of vermin in your house or you just have a lot of poisonous gas lying around waiting to be used up, you can practice your exterminating skills in the new physics puzzle game, Rats Invasion. It seems that rats have infiltrated your kitchen and made themselves comfortable between your pots and jam jars. If you want to reclaim your territory, you'll have to use your mouse to aim and shoot at the little invaders. 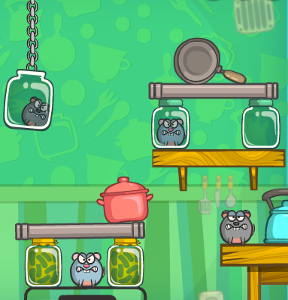 There are two basic ways to send the rodent blighters to kingdom come: shooting harmful items at them, such as gas cans or bombs, and making them fall on hot/sharp surfaces. Simply making them fall off the screen won't do, though; if this happens, you'll have to restart the level. Sometimes you'll have only one cannon, sometimes two, but in both cases the available ammo will have to be fired in a pre-set order. There are no extras in case you make a mistake, so eliminating all the rats takes a bit more planning than your average crush-the-castle kind of game. The levels are clean and simple, but they still keep introducing new elements and interesting layouts. The physics work fine, and include a few details that make gameplay smoother (for example, items which stick to surfaces instead bouncing off them). As far as subject matter goes, Rats Invasion would perhaps be rather cruel if not for the adorable visuals. The cartoony surroundings add a lighthearted air and make the violence against rats seem like a bit of slapstick roughhousing, so whether you like rats or not, Rats Invasion provides some solid, cute, silly physics puzzle fun.

3,671 Views
0 Comments
chrpa— Jayisgames needs your help to continue providing quality content. Click for details Welcome to the Roundup 45 with three games! As mentioned in the previous roundups, only odd-numbered episodes are featured since even-numbered are for Robin Vencel's patrons. More...  ...

Is Bingo Popular in New Zealand?

1,334 Views
0 Comments
jayisgames.com— Previously, bingo was thought to be popular in the UK where the British have adopted this game as an integral part of their life. This social game has expanded its popularity chiefly in other countries including New Zealand. The...  ...

4,195 Views
0 Comments
chrpa— Jayisgames needs your help to continue providing quality content. Click for details Welcome to the Roundup 44 with three games! As mentioned in the previous roundups, only odd-numbered episodes are featured since even-numbered are for Robin Vencel's patrons. More...  ...