Imagine a bunch of magnetic blocks that you can stick to your refrigerator. If you put them in the right spots on the fridge door, you can drop a marble from the top of the fridge and have it bounce and fly about until it reaches the target at the bottom. That's the basic idea behind Marble Run, a cooperative webtoy that won the Mozilla Labs Game On open Web game development competition. And yes, it's cooperative, because you're building just one part of a gigantic, continuous marble run with thousands of other players, like refrigerators stacked from here to the moon. Just pray that the milk is in one of the lower ones. 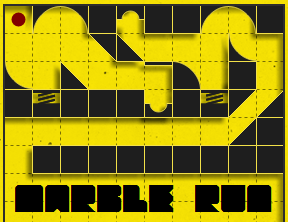 On each, shall we say, "fridge door," you'll find a 10x15 grid with a marble in the top-left corner and the finishing target in the bottom-left corner. Your goal is to get the marble to the target through whatever means possible. Of course, you could just start the machine and let the marble drop straight down, but where's the fun in that? To the right of the grid are a couple boxes full of bricks. Click and drag the bricks into the grid, or click a brick and "paint" them into position, then click each brick to rotate them 90 degrees. How long of a track can you create?

To help you go the distance, there are a few special bricks, such as teleporters and trampolines, that can send the ball flying in all different directions. When you complete a track, you can submit it to the database (be sure to add your name and a title). Each track added boosts the collective track length, and new special pieces are added the longer the track grows!

While addicting in an oddly simplistic way, there are a couple of drawbacks in the Marble Run system. First, with the ability to submit any completed track, some less-than-family-friendly designs have popped up in the database. There's a button to report inappropriate tracks, but as they are not immediately removed, they may still appear, which is the sole reason why we've given this game an Orange rating. Also, for whatever reason, pieces may not behave very predictably at times. It's fun to exploit some of the quirkier characteristics of some blocks (such as trampoline blocks that work as propulsion systems when laid sideways underneath the marble), but occasionally you might not get the same results everytime. Some tracks in the database, while they may have worked for the original poster, might not work for everyone, for whatever reason.

Still, there's a lot of game to be found in such a simple webtoy. You might challenge yourself to produce a track that results in an exact length, or try to see what designs you can make with the blocks. The community element adds to the fun, as you're all working to fulfill a common goal. Give Marble Run a try and see what happens when your track is put into motion.

Doesn't work, despite installing fonts I just get a page error

It's quite fun, as a distraction for a couple of minutes. As the thing is billed, though, where everybody is trying to collaborate to create one long track, it's a shame that you can't start the ball at the beginning and have it run through all the tracks in turn. As it is it seems less like one cohesive whole and more like what it is - a collection of very, very small pieces.

Aww, it doesn't work with the latest Firefox unless you upgrade to the beta.

It works fine for me...great fun, but it needs a way to delete single blocks without dragging them off and some kind of markings (numbers?) so you can tell which teleporters are connected.

What do the lines with the triangle do?

@trollface Completely agree. I was hoping I'd stumble across an option to run several tracks back to back, but no such luck.

Still a really fun webtoy, though.

@keith and trollface: You can! When viewing a submitted track, click the "Auto" button at the bottom and it will automatically run through the tracks in order of how recently they were added.

@Bandycoot: The lines with the triangles are one-way platforms. A marble can go through the platform in the direction indicated by the arrow, otherwise it acts like a solid platform.

Not bad. I did a number of tracks with a "Padded Cell" theme, search for "Kevin" to find them.

Wow, Chris...I really hate your track. But I guess in this context, that's a compliment.

Is anybody else able to create levels that behave differently on two different runs, without changing anything?

Interesting trick: the concave ramp behaves differently whether or not there's a piece up against it. If the ball hits the ramp horizontally at high speed, it will launch diagonally, keeping a little of its sideways momentum. But if you put another block behind the ramp, the ball will launch almost straight upwards.

(No, this is not related to my previous comment; that still stands.)

I have found my new addiction.
Search for "A Tight Fit"

Yeah... see I just published a track that worked when I tested it, but not after it was published ("daisy").

Mine tested fine over and over again in the building editor, but when I published it, it got stuck repeatedly. Seen some others with the same problem. Weak.

It seems that the website is currently down. Shame since I was playing with this yesterday.

I can't get this to play in Firefox, Firefox Beta, OR IE! It wants to load in IE, but not in the other two browsers. I should expect as much, this is a good game and good games never work ever.

This game has serious problems. It wont load in IE, Firefox, or Chrome. The only thing that shows up is an error screen. If lots of people are having this problem, then something is wrong with the site.

I think the server is down. D:

Hopefully the server will be back up again soon

Servers are back online! Now my productivity level has gone down! :D