Brunhilda and the Dark Crystal

With a name like Brunhilda, you really have no one to blame but your parents when a wise-cracking demon shanghais you into entering a parallel dimension to fulfill an ancient prophecy. That's right up there with Samantha Swift in the "names that are just asking for epic adventures" category. Sure enough, in Brunhilda and the Dark Crystal, your fate-temptingly named heroine traverses a magical continent via teleportation, broom, dragon, flying ship, and more, collecting shards of the crystal. This team effort between Polish developers Codeminion and Twin Bottles features Mortimer Beckett-like hidden object game play and an outstanding fully voice-acted plot. 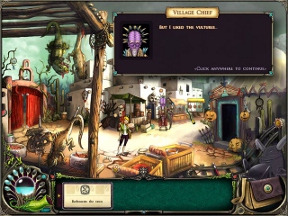 Unlike your typical hidden object game where you zoom into an area and find a list of items within that area, all the items you'll find in Brunhilda are right on the regular screen. As you progress through the game, you receive quests from various creatures that you meet, and these quests will be stored at the bottom of your screen.

For example, you may need to collect five mushrooms and eight eggs for a chef's omelet. Simply click on the items as you find them and Brunhilda will wave her wand to collect them. You can hover your mouse over your quest to see what progress you've made and how many of each object can be found in your current area, since sometimes you need to move to another area to find all the objects. In addition to object finding, there are also a few mini-games used to brew potions, cast spells, and communicate via crystal ball.

Analysis: Even fully-voiced cutscenes are no longer a guarantee in casual games, so to play a game where every bit of dialogue is spoken is a treat. You can tell the voice actors were having fun coming up with outrageous accents for the creatures Brunhilda meets on her journey, and the dialogue is witty and fun in itself. Plot and aesthetics are definitely Brunhilda's stand-out feature. Objects and backgrounds are lovingly detailed and frequently whimsical. 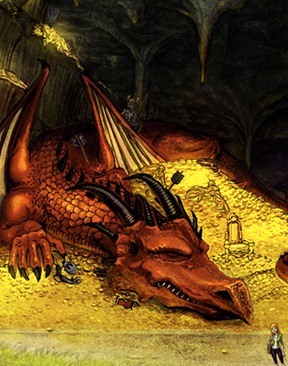 While the game deserves credit for trying to stand out from the hidden object crowd, by breaking the object finding into a bunch of smaller chunks, it risks becoming repetitious. In order to get what you want from people, they give you a quest for a small number of objects. When you deliver them, you're given another quest for a similar amount of different objects. And another. And then another. While the logic of this gameplay mechanic is obvious, emotionally it can be a bit irritating, even more so because the writing encourages you to identify so much with Brunhilda.

The worst instance is one scene where, in every quest you are given, you must back out of the room and climb a tower to find the objects, then descend and enter the room to complete the quest, whereupon the quest-giver gives you yet another quest that requires climbing back up the tower. It really makes you wonder sometimes why Brunhilda doesn't just knock people out with her wand and take what she wants, or failing that, at least ask "Hey, while I'm doing that, is there anything else we're going to need?"

That said, Brunhilda does so much right (no penalty for misclicks, hurrah!) and has such a great story that it's definitely worth trying. Not to mention that its length of four to five hours is very good for a contemporary hidden object game. Although Brunhilda wasn't a smash hit when it first came out, it's been building up quite a following through word of mouth, which inspired me to try it. I loved it, so why not see what you think?